Song One, with 17-year-old Will Stanley in the saddle claimed the the $9,000 Western Tree Care Bedgerabong Picnic Cup. Deputy Prime Minister Michael McCormack presented the Cup to all of Song One’s connections. Song One was purchased for $700 and has since won over $70,000 in prizemoney. Image Credit: Bedgerabong Picnic Race Club Inc Facebook Page.

Seventeen-year-old Will Stanley from Bathurst was aboard Song One as it passed the finishing post to claim the 2021 Western Tree Care Bedgerabong Picnic Cup.

Not bad for the first day of his jockey career.

The Committee’s hard work paid off, with the event held within COVID-19 guidelines attracting visitors from far and wide.

With numbers capped, tickets sold out well in advance of the popular annual country race meeting, which marked 102 years of racing at the location.

Heavy rain on the eve of the event did not hurt the Bedgerabong Race Track, with it and the expansive gardens and lawns in immaculate condition.

Col Hodges, a legend of the race calling industry was honoured by the Bedgerabong Picnic Race Club Committee for his 50 years in the industry.

“Our committee appreciates your dedication to our club and the racing industry,” a post on the Bedgerabong Picnic Race Club Inc Facebook Page read.

The estimated 1800 plus strong crowd cheered on Stanley, as he rode not one but two winners on the day.

He was in the saddle on Dot The Eye, in the Maiden Plate over 1100 metres. Trained by Wanda Ings from Bathurst, the horse overcame its opponents to win. It beat Arealist (Zara Lewis) and Cheselbeach (Maddison Wright).

Stanley did not get off to the best of starts in the $9,000 Western Tree Care Bedgerabong Picnic Cup, sitting in last place early on. He showed determination and spirit to win the 1400 metres Cup from Regina Margherita (Leandro Ribeiro) and Sensacova (Zara Lewis).

Maddison Wright rode On A Promise, owned by a syndicate from Lake Cargelligo and Tullibigeal, to victory in the 1100 metres Class 3 Handicap. She beat Lookin’ Alive (Wayne Wheatley) and Great Excitement (Michael Wade).

Her other winners included My Shiromi and Nepenthes. Both are trained at Dubbo by Clint Lundholm.

My Shiromi won the 800 metres Class B Handicap from Vanzant (Leandro Ribeiro) and Fame And Fortune (Wayne Wheatley). 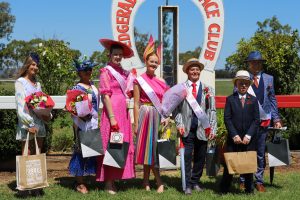 Fashions in the Field saw many dressed in their fantastic finery, Fascinators and sharp suits captured the imaginations of many. Image Credit: Bedgerabong Picnic Race Club Inc Facebook Page. 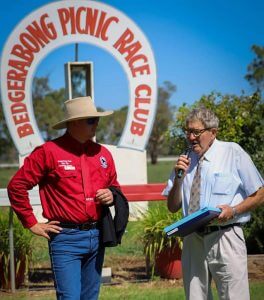