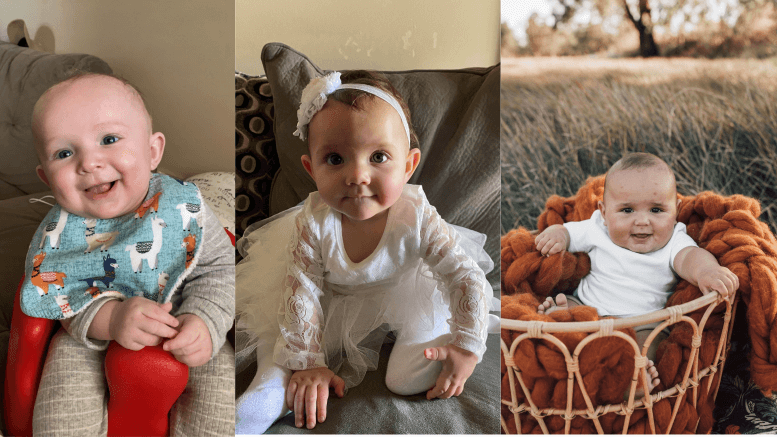 According to McCrindle Research, who collate data on Australia’s top baby names, then analyse and discern the nation-wide trends, Generation Y (also known as the Millennials), are not only choosing new and different names, but they are also parenting a new and unique generation – Generation Alpha.

“The year 2010 marked the beginning of not only a new decade, but a new generation. Children born in the last ten years are known as Generation Alpha – the most digital, global and visual generation on the planet, and will finish being born at the end of 2024,” their report stated.

Samantha-Lee Haworth and her partner Brayden Davis chose Hayes Raymond for their son, who was born in March 2021.

“It was a name I had liked since I was much younger,” Samantha-Lee said.

“I had a list of both boys and girls names which I showed Brayden before we knew the sex of our baby.

“A few weeks later Brayden told me he really liked the name Hayes and that it worked well with his late pops name Ray.

“So, once we knew we were having a boy he was always going to be named Hayes Raymond.

“We love that we don’t know of anyone who has used his name and that it’s not considered to be popular.

“To us, it was more important that we both loved the name we chose for our son. We also often joke that it’s so easy to say all at once that Hayes will definitely know when he’s in trouble as he gets older!”

Jessie Haydon and Brandan Singh welcomed their daughter Maleah Mae into the world in November 2020.

“Brandan actually picked her name, he originally heard it on a tv show he watched. I chose her middle name as I have always loved Mae and the way it’s spelled, it just went well with her name Maleah,” Jessie explained.

There was no special significance attached to their baby’s name, as they “both liked it [Maleah] in the end.”

“Brandan had said Maleah too me a few times during my pregnancy as we knew we were having a girl but I didn’t like it at first I wanted to name her something different, but once she was born and we both held her we both agreed on Maleah Mae. It was a name we had never really heard of anyone else choosing.”

Courtney Escreet and Tyrone Johnstone named their son Zayden John when he entered the world in May 2020.

“I always liked Kayden but TJ (Tyrone) wasn’t a fan as we both knew a lot of males with the name Kayden. Zayden was very similar and I also liked it,” Courtney said.
“We always had a girl name that we both liked.

“It was just a boy’s name that we struggled with and I kept saying to TJ quick we need to find a name we are running out of time! One night TJ said yep Zayden it is if it’s a boy!”

The couple chose Zayden as it was not a very popular baby name.

“I think that’s why we liked Zayden as it’s not a very popular name, or an overly common name. We couldn’t picture him with any other name. He is definitely a Zayden,” Courtney concluded.