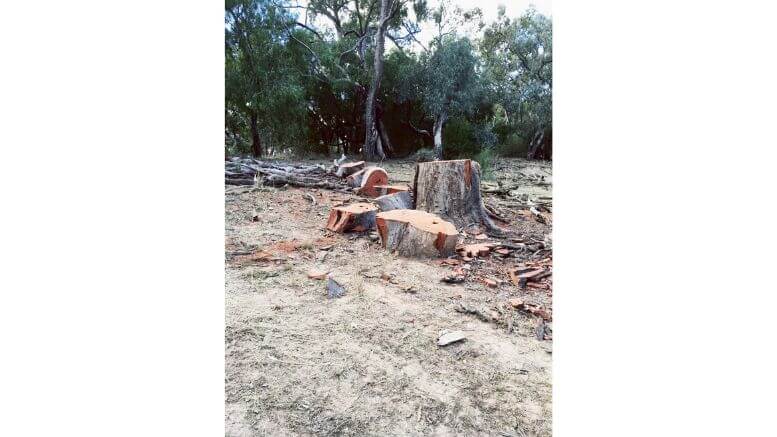 Lachlan Shire residents are being warned not to take firewood from Travelling Stock Reserves (TSRs). Anyone caught removing timber or disturbing vegetation (alive or dead) from a TSR can be fined up to $5,500 under the Local Land Services Act 2013. Image Credit: Local Land Services.

Lachlan Shire residents are being warned Travelling Stock Reserves (TSRs) are off limits for firewood collection.

With the cooler weather hitting NSW, Local Land Services is reminding people that it is illegal to collect firewood from TSRs.

“While it is lovely to enjoy a roaring fire when the mercury drops, do not get burnt by a hefty fine for taking wood illegally,” Local Land Services Director of Regional Operations, Rob Kelly, explained.

TSRs are parcels of Crown land which were traditionally used for moving stock and grazing. They are now recognised as having important values for biodiversity conservation, Indigenous culture and recreation as well as grazing.

Local Land Services is responsible for the care, control and management of about 30 per cent of TSRs in NSW, covering about 530,000 hectares, mostly concentrated in the Central and Eastern Divisions.

Anyone caught removing timber or disturbing vegetation (alive or dead) from a TSR can be fined up to $5,500 under the Local Land Services Act 2013.

These rules help protect the integrity of the network of Travelling Stock Reserves which is recognised as an asset of state significance with agricultural, social, cultural and ecological values. TSRs are an extremely important refuge for many rare and endangered native plants and fallen logs and standing dead wood can be part of their habitat.

Decaying timber and leaf litter are also important in the process of nutrient recycling back into the soil.

“We need to make sure there is a clear understanding in the community about the importance of TSRs and their long term viability,” Mr Kelly stated.

“When it comes to firewood collection, TSRs are off limits and our staff are continuously monitoring activity for any illegal behaviour.

“Action may be taken against anyone found removing firewood or carrying out other illegal activities such as dumping rubbish or four wheel driving.”

Taking note of registration numbers, descriptions, locations and dates also provides valuable information that can assist in the prosecution of offenders.

While firewood collection is not permitted on TSRs, members of the public can apply for a permit to collect firewood from selected state forests.