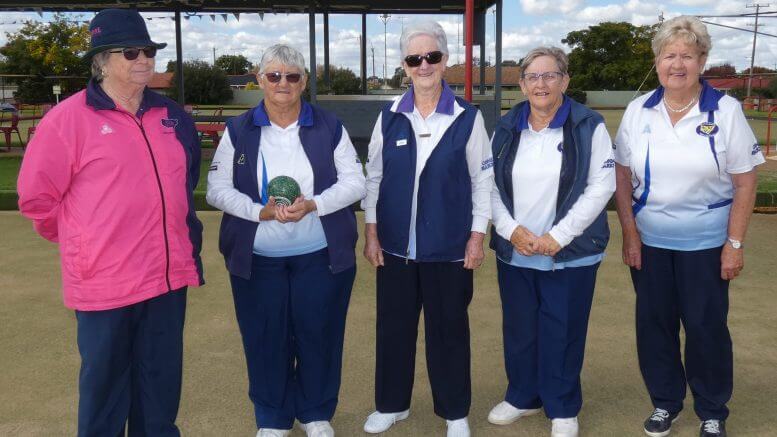 Congratulations to Colleen Helyar, Judy Johnson, Pam Nicholl and Pauleen Dimos for winning the 2021 Regional 10, Senior Fours Championship held at West Wyalong on Wednesday 12th and Thursday 13th May. Wednesday, Condo Sports defeated Young 18-15, in the morning. Young defeated The Rules Wagga 21-7 in the afternoon. Thursday morning Condo Sports defeated The Rules Wagga 17-15. Our girls have now qualified for the State Championships to be held at South Tamworth in late August 2021.

Saturday 15th & Sunday 16th May the district Singles were played at Lake Cargelligo.

Congratulations to Samantha Dawson on her performance in her first ever District game, going down 25-19 to Leanne Black (West Wyalong S and C). Good bowling Samantha.

Cathy Thompson cruised through her second round, defeating Julie Twomey (Lake Cargelligo) 25-14. In her third round Cathy played Kaye Payne (West Wyalong), Cathy came from behind to defeat Kaye 25-20. Very excitedly looking forward to her fourth round.

Pam Nicholl, another splendid display of draw shots bowls, defeated Anni Stear (West Wyalong S and C) 25-13 and into the third round, to play last year’s Regionals Winner Kerry Turner from (Lake Cargelligo), Kerry won the first end, and so on, at 7-7, Pam played the more consistent bowls, drawing away to win 25-16.

Now it was the fourth round that Cathy and Pam had been waiting for. Cathy was first to score, 3-0 after second end; Pam being Pam, this wasn’t going to happen, not today, her consistent good bowling and bowls experience allowed Pam to take this match 25-7. Congratulations to Cathy and Pam, what a game.

Pauleen Dimos played “catch up” in her very tough match against Bev Fyfe (Lake Cargelligo). Pauleen scored one shot in the first end, before long, Bev had a strong hold on this match, up 14-7.

The hard road back had to start, otherwise this would be the end of Pauleen’s hope of a District Singles title, for another year. Gradually one shot at a time, 18-18, then 20-20, Pauleen then scores two shots followed by another three shots to win 25-20. Into the next round to play Tanya Chaffey (Temora Exies). A good start for both players, after seven ends 7-7, as the Match progressed

Congratulations to all players for flying the flag so high for our Condobolin Sports Club.

Best wishes to Pam Nicholl for the Final on Sunday 30th May at Lake Cargelligo, her opponent Tanya Chaffey. This match will commence 10.00am, spectators very welcomed.

A good habit for all Singles players to develop, always always, check your score cards throughly before signing your name to the score.

Monthly meeting will be held tonight Wednesday 19th May, commencing at 6:00pm.

On the draw for Social bowls Thursday 20th are Janelle Taylor and Judy Johnson. 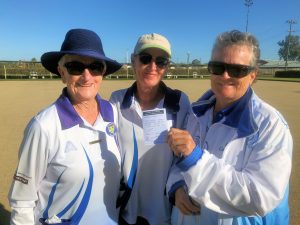 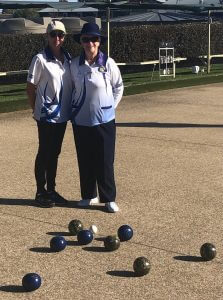