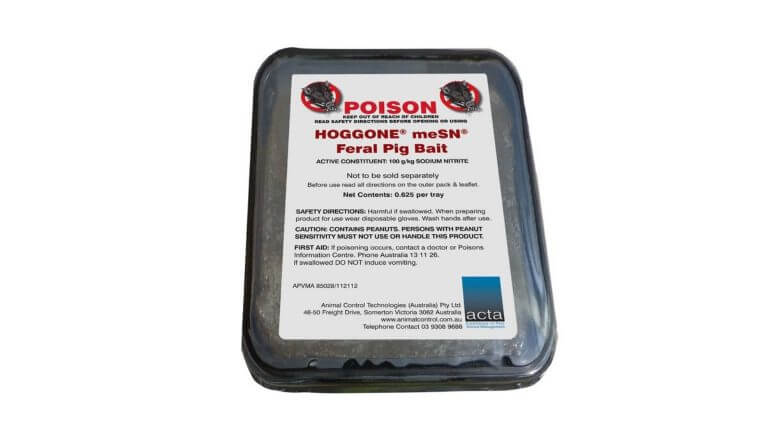 HOGGONE, a new innovative product, will help farmers in their fight against feral pigs. HOGGONE is a Schedule six poison so landholders can buy and use it without specific training or certification. It is deployed via a specially designed HOGGONE bait box that non-target animals cannot access. Image Credit: Animal Control Technologies Australia (ACTA).

There is a new innovative product that will help farmers in their fight against feral pigs.

After more than a decade in development, an Australian innovation to tackle this destructive pest – HOGGONE – has received regulatory approval.

HOGGONE was developed by Animal Control Technologies Australia (ACTA) through the former Invasive Animals Cooperative Research Centre with collaboration from USA and NZ scientists and support from Meat and Livestock Australia and AusIndustry.

“Feral pigs are spread over 45 per cent of the Australian mainland and cause significant destruction to agriculture and the natural environment,” according to ACTA.

“They cost Australian agriculture more than $100 million a year and that will skyrocket if African swine fever gets into Australia and feral pigs prevent eradication.”

“With estimates of up to 24 million of the destructive pests in Australia, the current La Niña weather event means feral pigs are likely to increase in number and range in the coming months.
“HOGGONE is a key part of the solution to the feral pig problem in Australia. Its capacity to cull large herds quickly and humanely has the potential to revolutionise our approach to management.”

He said HOGGONE has an innovative formulation of the active ingredient, sodium nitrite, which is a very effective and targeted poison for pigs.

“Sodium nitrite is a food preservative which is safely used in low concentrations. People and most animals can tolerate modest amounts of sodium nitrate, but pigs lack the protective enzyme that is present in other species,” Dr Staples stated.

“HOGGONE renders pigs unconscious before they die, typically within one to three hours, without suffering.”

Importantly, according to ACTA, it breaks down very quickly in the environment, leaving no toxic residues. The challenge for developers was to find a way to keep the active chemical stable and attractive to pigs.

“It took us more than 10 years to develop and refine this product and we are so excited to get it out to farmers and public land managers,” Dr Staples advised.

HOGGONE is a Schedule six poison so landholders can buy and use it without specific training or certification. It is deployed via a specially designed HOGGONE bait box that non-target animals cannot access.

“Early adopters are having excellent results on the landscapes they manage and farm,” ACTA said.

Toowoomba-based pest researcher and consultant Darren Marshall has run trials to test HOGGONE in south west Queensland on multiple properties and in a national park.

“If you use as the label suggests, it works very well. It is very humane and achieves really good knockdown with a lot of the dead pigs found close to the baiting station,” said Mr Marshall, the General Manager – Commercial Programs at natural resource management organisation, Southern Queensland Landscapes.

“We need to control feral pigs to protect agriculture and the environment.

“We need to kill 75 per cent of the feral pig population in an area to control them, and you can only do that through baiting or aerial shooting. That’s why HOGGONE is a really important tool in controlling feral pigs.”

For more information or to purchase the product, visit https://animalcontrol.com.au/products/hoggone