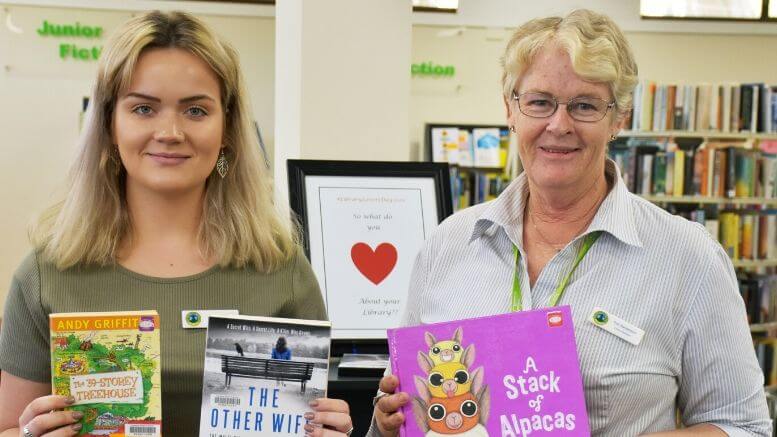 Kelsey Ward and Toni Sanderson showcase some of the top ranked books, which were borrowed by Condobolin Library card holders in 2019. Image Credit: Melissa Blewitt.

Whether you like romance, science fiction, suspense thrillers, biographies, crime, horror or a picture book, you can be rest assured you will be able to find it at the Condobolin Library.

The community indulged in all types of genres throughout 2019, with the Library recording the top 10 picture books, junior fiction and adult fiction borrowed over the 12 month period

There were some old favourites and some new additions that caught the eye of Library card holders.

The book which tops the junior fiction list is centred around Andy and Terry’s amazing treehouse. It has thirteen new levels! They’ve added a chocolate waterfall, a volcano for toasting marshmallows, a bulldozer-battling level, a baby-dinosaur-petting zoo, a not-very-merry merry-go-round, a boxing elephant called the Trunkinator, an X-ray room, a disco with light-up dance floor, the world’s scariest roller coaster and a top-secret thirty-ninth level which hasn’t even been finished yet. But how can they enjoy all this brilliant stuff when they have to write a book faster they’ve ever done before? You’ll have to read it to find out!

Condobolin Library top 10 adult fiction books for 2019 were 1 The Other wife by Michael Robotham; 2 Bridge of Clay by Markus Zusak; 3 The Wife by Meg Wolitzer; 4 Scrublands by Chris Hammer; 5 Shepherd’s Hut by Tim Winton; 6 The Wrong Callahan by Karly Lane; 7 The Golden Age by Joan London; 8 The Golden Child by Wendy James; 9 Out of Sight by James Patterson and Brendan DuBois; 10 The Miniaturist by Jessie Burton.

The Other Wife by Michael Robotham, has been described as a mesmerising psychological thriller from one of the greatest crime writers of today. The book centres on Childhood sweethearts William and Mary who have been married for sixty years. William is a celebrated surgeon, Mary a devoted wife. After William is brutally attacked, the family’s world is turned upside down, when a mysterious woman is found crying at his bedside. William’s son Joe O’Loughlin launches an investigation, and discovers secrets about his father, that inevitably shows him the truth sometimes can come at a high price.

All these books and more can be borrowed from the Condobolin Library – take the opportunity to check them out, or even take them home to enjoy.