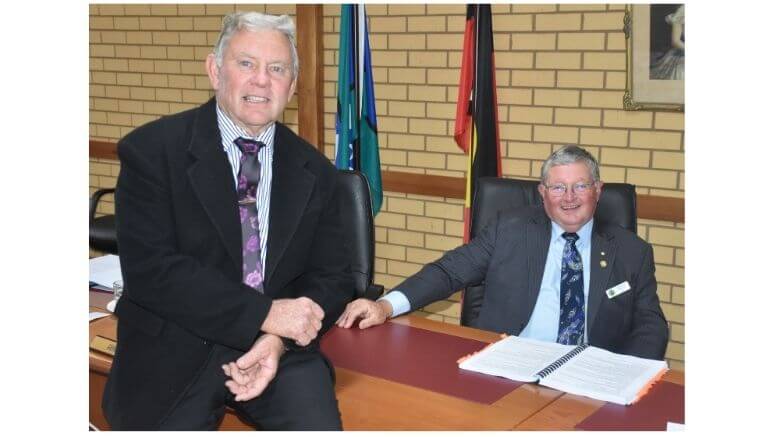 Councillor John Medcalf OAM and Councillor Paul Phillips will retain their positions as Mayor and Deputy Mayor for another 12 months.

Lachlan Shire Council’s two most senior office holders were re-elected for a further one-year term at the Council meeting on Wednesday, 23 September.

Mayor John Medcalf OAM and Deputy Mayor Paul Phillips were returned to their roles unopposed, by their fellow councillors.

Cr Medcalf, who lives in Tottenham and has served on Council for 29 years so far, said he was extremely proud and honoured to again take on the role as Mayor.

“I’m looking forward to a positive and productive year ahead working with the Council and our Deputy Mayor Paul Phillips for the benefit of the various communities in Lachlan,” he said.

Cr Phillips, who lives in Lake Cargelligo and has served a total of 16 years to date, said he was also very proud and honoured to continue to serve the community in his role.

“I’m looking forward to working with my fellow Councillors and the various communities in Lachlan to improve social outcomes and renew infrastructure. I believe that the current Council is the most productive and progressive I have seen for the last 18 years,” he stated.

The election of the Mayor and Deputy Mayor was officially declared by returning officer Greg Tory, General Manager of Lachlan Shire Council, following the close of nominations for the position.