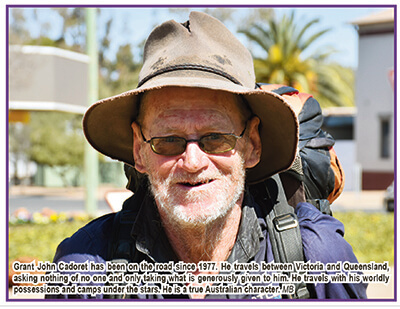 Grant John Cadoret has been on the road since 1977. He travels between Victoria and Queensland, asking nothing of no one and only taking what is generously given to him. He travels with his worldly possessions and camps under the stars. He is a true Australian character. MB

Posted By: The Condobolin Argus October 8, 2019

Grant John Cadoret has walked a lot of miles. A quiet dignity and strength his only companions for a large majority of the time. He has been called many things. A
journeyman. A swagman. A missing person. A wanderer. A madman. A lost soul. But it’s much simpler than any of those explanations. As he puts it, “I’m just John.”
John put his bags down in Condobolin last Wednesday, as he took a break on his way to West Wyalong. He also took the opportunity to contact
his Mother, to let her know he was alright.
“I’ve been on the road since 1977. I just needed a break so it started out as a break from work, and just went on from there,” he explained.
“My parents separated and I had trouble dealing with that. I began to feel restless.
“So I took time off work to go on a holiday.
“I was a bank teller and the three months just kept turning into years. I probably should have told someone where I was, how I was going, but I just didn’t.”
Does he have any regrets? His answer is an emphatic “No.” Not even when his family thought he was dead? “I never thought about what they would feel. I was young and you do
stupid things. I do keep in contact now, write letters and talk to them, and that is what matters,” he stated.
“It was hard on my mum, but now I call her to let her know where I am and how I have been going.
“I don’t regret anything. Regrets are useless. You just hopefully learn. I have learnt to take each day as it comes.”
He now even stays with his sister in Bendigo, when the road leads back there.
“But after three or four days, I am climbing the walls,” he said. “Start to get keen to get back on the road.”
John has never been on the dole and he never expects more than people offer. While in Condobolin he stopped in at Vinnies (St Vincent de Paul store),
and found some reading material that appealed to him.

“You always meet interesting people and most are interested in your story. The thing is, my story seems interesting to others, but to me it isn’t. I am just doing what feels right for me,” he said.
“It’s been a pretty cold winter, so there have been a few times when I have looked out the top of my swag, and thought to myself, I just might stay inside for another hour. I don’t like to let my feet get cold, cos’ then I can’t get to sleep.
“I just walk each day until my body tells me I am tired. Then I find a place off the side of the road and make my camp.”
How long does John think he will keep on the road? “As long as my body holds up, I will keep going,” he said.
He has never asked for much, and never expected much in return. John lives a simple existence. Quite a contrast to the bustling world that moves around him on a daily basis. There is an acknowledgement that the world can often be tough and unforgiving, but he believes it owes him nothing.
“There really isn’t much I miss. You just get used to living without stuff,” according to John.
“I don’t have any regrets with my life and I’m happy.”
He often lives off food thrown out of cars or what he can find. But then there are times when he gets to see generosity and hope.
“People sometimes give me sandwiches and bottled water. Sometimes I even get a bottle of coke. You get to meet some lovely people,” he said.
“Now there is Facebook and all sorts of things to tell people where I am going. It’s a bit funny really. I’ll have a talk to anyone and now most people recognise me and want to have a chat. “Like my visit to Condobolin this time – I got to meet some teachers and young people from Lachlan Children Services –they asked me questions and we had a photo together.”
All John owns, he carries with him. He always wishes the best to the people he meets along the way. He has achieved something so many of us want but can never find. He is content and at peace, and that may be hard to understand for some. He lives a simple life, but a fulfilled one. There may be a lesson for us all in that.
May you be safe, and keep travelling for as long as you feel the need to, John