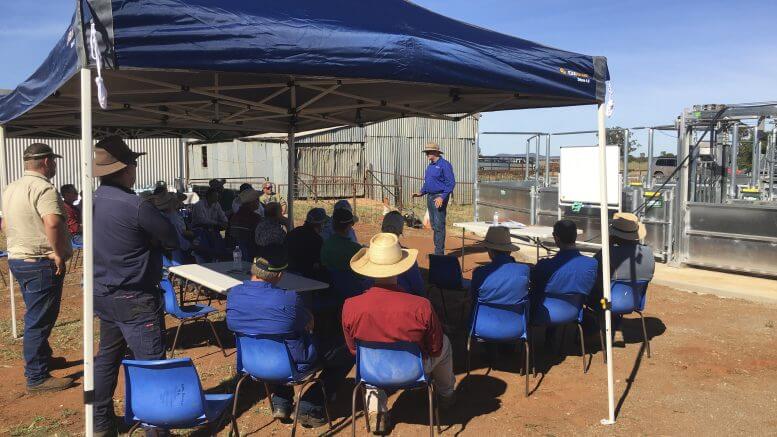 Wicus Cronje, Stud Master with Burrawang, addresses the farmers who turned up to learn about the key attributes of the Dorper Breed, and shedding sheep, at the joint Burrawang and Tullinga White Dorper Field Day on Friday 4th of March. Image contributed.

Burrawang Dorpers and White Dorpers and Tullinga White Dorpers held a joint Field Day to teach people about the key attributes of the shedding sheep breed.
Around 35 people turned up to the Wald’s property “Banar” South of Condobolin to listen to Wicus Cronje, Stud Master for Burrawang, assisted by Mal Brady, a Burrawang Principal, give a talk on the history and goals of the white dorper/dorper breed.
Wicus Cronje gave a demonstration in practical sheep classing using joined 11 month old ewe lambs, 11 month old ram lambs and Burrawang sires including White Dorper super sire King Kong.
The day also included a demonstration of sheep handlers and the Wald’s new yards at “Banar”. Jack Piercy from Forbes Livestock and Agency Co demonstrated weighing 14-20 week old weaner lambs, who ranged in weight from 32 to 60 kgs, with an average of 44kgs off grass. Early maturity, growth and a quick turnoff are a hallmark of the Dorper breed.
Brendan White from Kevin Miller Whitty and Lennon, with Greg Moncrieff of Moncrieff Livestock and Property, spoke on Condobolin associated agents upcoming Shedding Ewe Sale on Thursday 7th April. The sale will be held at the Condobolin Sale Yards, commencing at 10am.
The day also allowed future dorper breeders from Hillston to Tottenham, as well as locals, to meet with other breeders new and old, as well as Emily Mosely from Etiwanda Stud and Tom Brooks from Lake Cargelligo, during a light lunch to end an information packed day for all. 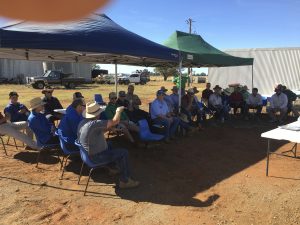