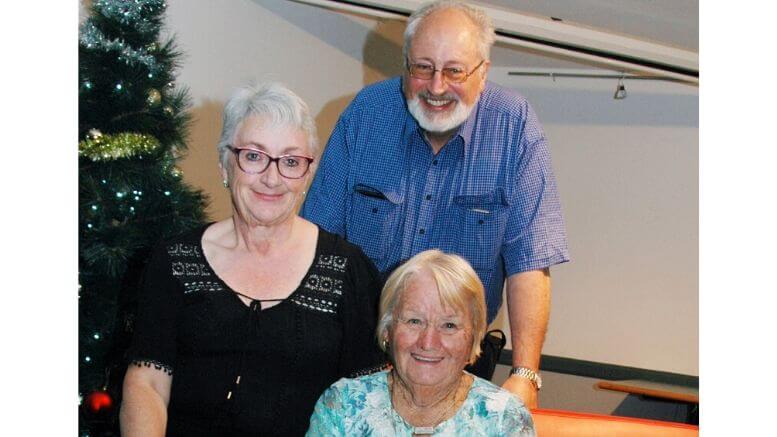 Judy Price has always had the Condobolin community at heart.

The Condobolin SES Unit held an end of year presentation night at the RSL Club on 27 November, last year, where they honoured Mrs Price for her dedication and commitment to her role as Unit Controller (recently changed to Unit Commander).

Judy joined the NSW State Emergency Service in August 1987. “Judy is coy about when she took over as Unit Controller because she does not seek recognition or to put herself out there as anyone special. Judy likes to help people and is involved in several community organisations like Vinnies and Can Assist as well as the SES,” Local Commander, Cunningham Cluster, NSW SES, Keith Dawe, explained.

“Over her long service she has collected many anecdotes, such as running the food station during the clean up after a freight train carrying cyanide collided with a truck near the Condobolin airport on 22 July 1992. Her husband Keith had to visit her at the site to say hello occasionally.

“Judy has been involved in several floods, including 1990, 2012 and 2016. “Judy has been a qualified Road Crash Rescue operator for 27 years, often being the one in the vehicle communicating with the victims, or giving toys to kids to distract them.

“Judy thinks about the welfare of those around her, so few go hungry or thirsty on her watch. Judy has been known to straighten out people who seem to get too focused on the task, and don’t think of the welfare of all personnel on a job, not just SES.

“Judy has accumulated many qualifications, although she does not use some now, like chainsaw or flood rescue boat operations. Other qualifications include land search, map reading and navigation, storm and water damage operations, general rescue, first aid, team leader, operate communication equipment, unit administration, work in an operations centre, introduction to AIIMS (Australian Inter-service Incident Management System) and traffic control. Another one called looking after people fits Judy well.”

Judy recently elected to step down from the Unit Commander position when the SES went through an organisation transformation process. “She was happy to hand over the reins and take on another important role of looking after the welfare of unit members. Not that the irrepressible Judy looks like slowing down any time soon, but it is time to let someone else do it. That is Sue Bennett, a relative newcomer who sometimes wonders why she put her hand up, but shares Judy’s interest in looking after people,” Mr Dawe stated.

“Judy will soon be eligible for additional long service awards and clasps on the National Medal when she reaches the 35 years milestone. Judy received an SES Commissioner Certificate of Appreciation for her work during the 2016 flood.

“The unit members wish Judy well in her semi-retirement, still involved but with less pressure and workload. Thank you, Judy.”