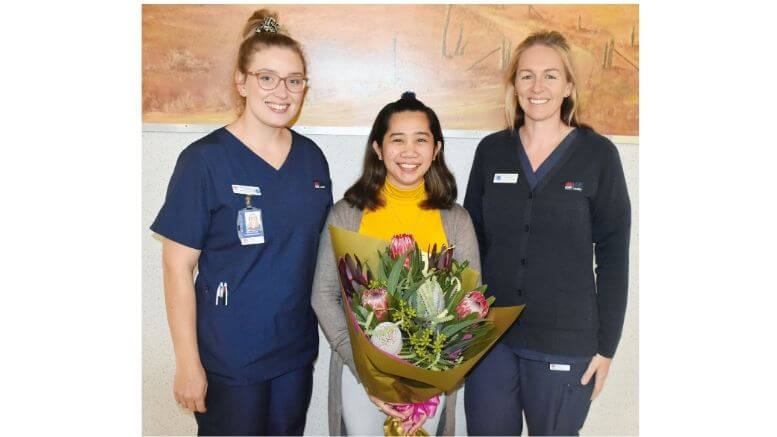 Josephine Palermo’s kindness and compassion has seen her be named the Condobolin Health Service’s Nurse of the Year.

Condobolin had an in house vote by all staff at the Hospital for their Nurse of the Year. Josephine, a Registered Nurse, was named the winner.

Qualities that staff recognised in Josephine were her smile, that she was kind and caring, her positive attitude, and making people feel happy. Jenna Keates (Community Nurse) and Caitlin Foley (Registered Nurse) were also nominated in the Western NSW Local Health District (WNSWLHD) Nurse of the Year Awards.

Josephine, Jenna, Caitlin along with other Condobolin staff celebrated International Nurses Day on Tuesday, 12 May where they joined in a virtual afternoon tea with other nominees via the Wally app.

This was hosted by Jacki Corliss with messages from Scott McLachlan, Brendan Cutmore and Adrian Fahy.

Josephine found out she was the local winner during the afternoon tea as did the eventual overall WNSLHD winner Christine Pugh from Peak Hill.

Staff at Condobolin and other sites were part of the afternoon tea whilst enjoying their own local celebrations.