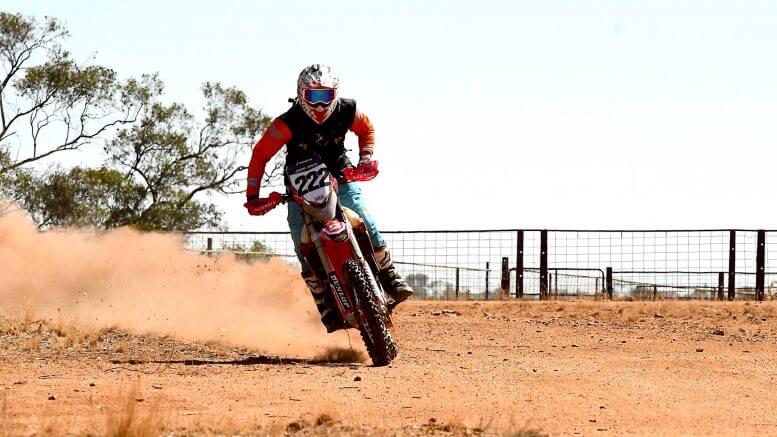 Condobolin’s Jacob Smith has triumphed in the Moto section at the 2018 30th Anniversary Condo 750 event.
He was more than happy with his performance, admitting he had a “great run.”
“I had a really great time this year, and I didn’t have any problems that held me back, which is always good,” he explained.
“It was nice to have everything go to plan, and be free of issues. Racing is a sport that has many ups and downs, and sometimes not everything goes your way, so when an event is trouble free that is a really big bonus.
“I felt like I rode well, had fun and got a great result as well which was nice.”
No stranger to the podium at the Condo 750, Jacob’s first victory was in 2007, when he entered the event for the very first time. He also won in 2016, beating his brother Todd for the trophy.
Jacob said he wanted to thank the organisers and the Condo 750 Committee for the exceptional effort they had put in to make the 30th Anniversary event such a success.
“It really takes a phenomenal effort to put on an event like the Condo 750. It’s all volunteers and they do a massive amount of work behind the scenes to ensure it goes ahead. Someone like me just turns up and rides his bike. An event like this doesn’t just happen, so I want to thank all those involved in the Condo 750, who made it such a great event for competitors and spectators.”
Jacob and Todd, along with their Dad Geoff have always loved racing. Most of the time, Jacob and Todd are going head to head for titles. However, in 2018 it was a little different.
This year, was one of the very few times, the brothers have not raced together in a Condo 750 event. While bittersweet, Jacob understands it’s time for Todd to step back from professional racing.
“It was pretty strange, really, not having him there in the race – I mean we are always pretty close in times and we both push ourselves to work harder,” Jacob said.
“He has to do what is best for himself and his family, and he and Dad went in a car this year, which was great to see.”
Jacob has always admired his brother’s tenacity and toughness on a bike, and his Dad Geoff’s determination and dedication while competing.
“Dad has been heavily involved in the 750 for many years, and now to see both Todd and Dad in a car together is fantastic,” he said.
“They didn’t actually finish the race due to mechanical issues, but they had a great time.
“Bikes have always been part of our family. It is so special to be able to have your brother competing at the same level and to have your family there to encourage you every step of the way.
“You need support of your family, because you can’t do anything like this without them. So I can never thank my family enough, for all that they do for me.”
While Todd is in the process of stepping back from professional riding, Jacob has no such plans.
“I will definitely be back to defend my title next year. I am planning to race for a few more years yet and I relish the opportunity to compete at the top level for as long as possible. Who knows? Maybe one day Todd and I could be racing in a car together at the Condo 750.”
Jacob’s next challenge is the 2018 Tatts Finke Desert Race, which will be held on the June Long Weekend, something he has been training for over the past 12 months.
“I have been working with Logan Thorpe for the past year, getting ready for the physical and mental challenge of competing at Finke,” he said.
“I get into the gym five or six times a week – it takes a lot to prepare for such an event. It helps that I enjoy working out. I will also be travelling to the Northern Territory for training runs before the actual race.
“It’s a lot of hard work, but if you want to be competitive, it’s just what you have to do.”