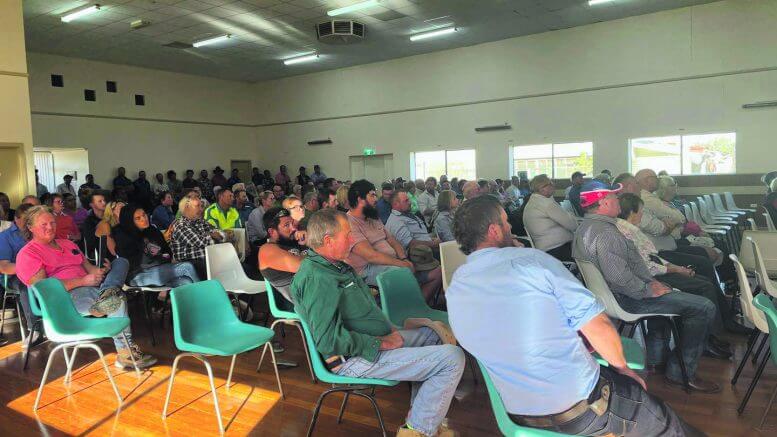 Hundreds of people turned up for a meeting regarding Gas Exploration in the Far West of NSW at Ivanhoe on 30 March. State Member for Barwon Roy Butler has praised community members for the motion, which they put forward at the meeting. Image Credit: www.roybutler.com.au

Over 200 people turned up for a meeting regarding Gas Exploration in the Far West of NSW at Ivanhoe on 30 March.

Earlier this year, the NSW Government’s announced its plan to explore large parts of the far west for conventional and unconventional tight gas exploration. These areas included the Bancannia, Pondie Range, Neckarboo, and Yathong Ivanhoe Troughs in Western NSW.

A number of landholders contacted State Member for Barown Roy Butler to raise concerns about the consultation process.

On, www.roybutler.com.au (dated 23 February, 2021) it states: “A handful of landholders in the affected area received letters in the mail advising them that the NSW Government was exploring four areas in western NSW that have potential gas resources.

“These landholders were told that they needed to register to be involved in the consultation process by Wednesday 17th February 2021.

“These landholders got in touch with my office concerned that their neighbours hadn’t received the letters and that people hadn’t been given ample time to register to be involved. They were also concerned that this process was inaccessible and not transparent.

“My office got in touch with the Department of Planning, Industry and Environment expressing concern that their ‘register for consultation’ window would close before landholders had received notification about what was happening.

“Individuals and groups who registered to be involved in the consultation have received an Information Paper. The paper contains details of the NSW Strategic Framework, specific to the Preliminary Regional Issues Assessment of the Bancannia, Pondie Range, Neckarboo, and Yathong Ivanhoe Troughs in Western NSW.

“Individuals are being asked to complete an online form regarding the project.”

At that time, 23 February, 2021, www.roybutler.com.au, said “Despite my appeals to the Minister for Regional NSW and the Minister for Planning, this woeful consultation process is still underway. I would have preferred them to go back to the drawing board and set up a consultation that was open and transparent. This consultation has been poorly planned and executed from the start – people living smack bang in the exploration area still haven’t been told by the NSW Government about what’s happening.

It went on to say: “Nonetheless I don’t want the opinions of people living in the area to be excluded or overlooked by the bureaucrats. We must all ensure our opinions on this exploration plan are heard.”

However, on 30 March representatives from the Department of Planning made their way to Ivanhoe to meet with concerned community members.

“Through my efforts and those of the Community, the Public Servants from the Department of Planning finally showed up out west,” Mr Butler said in his Roy’s Round-Up Newsletter, dated 5 April.

“They were given a clear message from the community in the form of a motion. I love their motion, couldn’t have said it better.”

The following were three points were made by community, as part of their motion that was put forward by members at the meeting.

Point One: “We the community members affected by the proposed gas exploration of the Yathong-Ivanhoe and Neckarboo Troughs don’t accept any risk, meaning zero risk to any surface and underground water supplies that are critical to supplying any town and residential water, stock and domestic water, and water for the purposes of irrigation.”

Point Two: “We the community members affected by the proposed gas exploration of the Yathong-Ivanhoe and Neckarboo Trough will not accept any harm or risks to Aboriginal heritage and cultural significance, roads and infrastructure, livestock disruption and losses, bio-security threats, insurance and public liability, policies and any cause for potential mental health cases.

Point Three: “Finally we the community member affected by the proposed gas exploration of the Yathong-Ivanhoe and Neckarboo Troughs will protect each other, will not allow individuals to be singled out, will not negotiate our future, will not consider any proposal that could potentially ruin the country for all future generations. United we want this gas proposal to stop right now and we are prepared to fight for as long as it takes.”

“Well done to the people involved. This is a great start,” Mr Butler concluded in Roy’s Round-Up, dated 5 April.