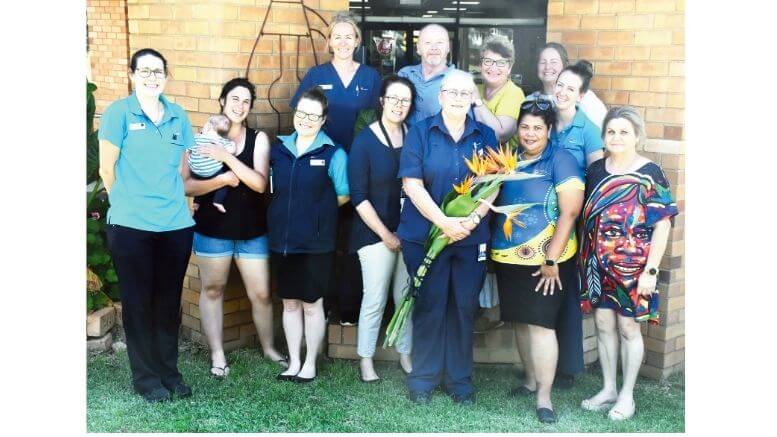 Helen Jeffers has said a final farewell to the Condobolin Health Service.

She officially retired from her role as a Registered Nurse with Community Health on Thursday, 12 November. The staff at Condobolin Health Service had a retirement morning tea for her on Tuesday. 10 November.

Helen Jeffers has been at Condobolin Health Service for seven years in her role as a Community Nurse, and is now looking forward to a new challenge in her life.

“I have absolutely loved my time at Condobolin,” she stated.

“I have really enjoyed it. I have made some lifelong friends and worked with a fantastic team, who I will miss very much.

“They have been my work family and I know you can always ring them up and say I need a hand or can I talk to you about this, debrief or whatever.

“They have always been there for me.”

Helen worked in Bathurst for 16 years before following her husband Ken to Condobolin.

“When making the decision to come to Condobolin, we considered many things,” Helen explained.

“My husband Ken and I always do things differently. Most people live on a farm and then go to suburbia when they get older, we did that the other way around.

“Ken has been in Condobolin for eight years, and I seven. A job was created here for Ken so he came first.

“For 12 months I could not get a job and eventually I was going to look for a job outside of nursing but Jenny Lincoln and the local health manager at the time, realised they needed another person who could immunise, so I came to Condobolin. And as you can see I have never looed back.”

Helen and Ken are making the move to Inverell, where they can be closer to family.

“We are moving to Inverell. We have bought a beautiful house up there,” Helen said.

The couple plans to slow down and enjoy life in the Inverell community.

“Our plans are we go to Inverell to our nice house, Ken has retired, so he is going to see about growing vegetables in the community garden,” Helen said.

“For the next 18 months I will be keeping myself occupied but it will not be in the nursing profession. I might work at a Chemist or a similar retail shop. I only want to work two days a week. It will be a bit of a new challenge for me.”

Helen is passionate about crafting, and is highly anticipating making more time for herself and her creative outlets.

“I would also like to make time for all my craft endeavours. I haven’t had much time to give to that. I spin wool, I haven’t done that for 15 months and I would really like to get back into that,” she advised.

“I would like to go to TAFE and do lead lighting. I would love to make different shapes in lead lighting and then I can make a hanging mobile or make something with my newfound skills.
“I also do macramé. I want to be able to integrate lead lighting and macramé somehow. I have plans to rediscover my crafty side. I have to get back to my craft.

“I will be able to go swimming because Inverell has a heated pool. Fitness is a big priority for me. I have to get back to walking and taking part in fitness activities.”

Even though Helen is leaving, she plans to keep in touch with her Condobolin friends.

“I plan to keep in touch with my Condobolin friends. There are some who have family who live near Inverell, so I will be expecting them to pop in and have a visit,” Helen said.
“When people are travelling to Queensland and they go that way. I hope they will call in and have a stop over.”

Helen and Ken are eagerly looking forward to spending more time with their family, especially their grandchildren.

“This is the last stage in our life, if I could put it that way,” Helen articulated.

“Most of our children and grandchildren are up Inverell way. We will be closer to family and that is the main thing.

“We will be able to get together with family more. But everyone will have their own space, which is important.

“It will be lovely to watch the grandchildren grow and be part of their lives a bit more.”

Helen and Ken will be making the move to Inverell before Christmas.

The settlement for both places is on 1 December, so they are already organised to move. The couple held a garage sale on 21 November, to help them declutter before they say a final farewell to a town that has been their home for the past seven years.