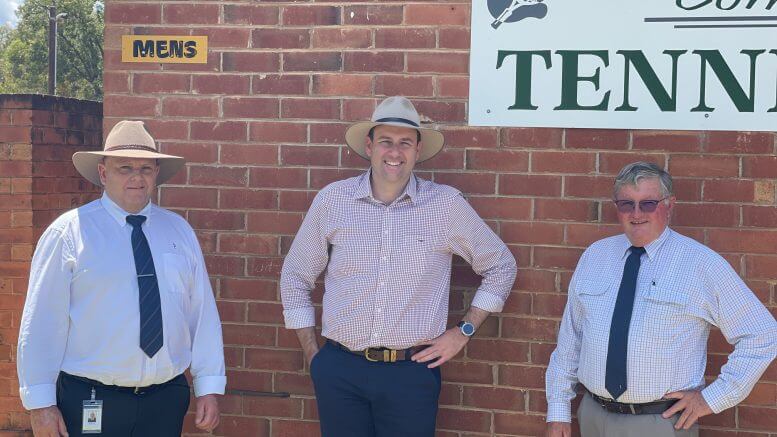 Parliamentary Secretary to the Deputy Premier Sam Farraway with Lachlan Shire Council General Manager Greg Tory (left) and Lachlan Shire Councillor John Medcalf OAM at the Condobolin Tennis Club, which is the site that is used as the Lachlan Valley Physie Facility. A total of $60,000 has been allocated under the the Stronger Country Communities Fund for a facility upgrade. Image Contributed.

A total of eight projects will be delivered across the Lachlan Shire under the latest wave of developments rolling out to deliver new and upgraded facilities, infrastructure and programs that make a big difference to the area as part of the Stronger Country Communities Fund.
The funded projects include $60,000 for the Lachlan Valley Physie Facility Upgrade, $75,000 for the Willowbend Sports Centre 2877 roof repair, $50,000 for the Lake Cargelligo Memorial Hall Amenity Upgrade, $67,000 for a Electronic Noticeboard – Ute Design, $135,208 for the Tullibigeal Netball Court Refurbishment, $50,000 for the Tottenham Recreation Area for the purchase and installation of security fencing, $65,000 foe the Lake Cargelligo Junior Cricket Club, and $168,975 for the Condobolin River Walkway.
“Lachlan Shire Council has been well supported by the NSW Government in previous funding rounds which has seen over $2m invested across our communities,” Lachlan Shire Council General Manager Greg Tory said. “The last two rounds have had a focus on encouraging greater female participation in sport, and it is great to see several of our projects addressing that criteria.”
Parliamentary Secretary to the Deputy Premier Sam Farraway said projects like these built upon the NSW Government’s vision to help make regional NSW the best place to live, work and visit.
“In Lachlan Shire Region, we’re going to see $670,000 invested across 7 Lachlan Shire Council projects,” he explained.
“This builds on the NSW Government’s ongoing support of the Lachlan Shire through the Stronger Country Community Fund delivering over $2,000,000 in funding from the first four rounds invested right across the Lachlan Shire”
Deputy Premier and Minister for Regional NSW Paul Toole announced that 435 projects across every single one of the state’s 93 regional Local Government Areas (LGAs) would receive funding under Stronger Country Communities Fund Round Four.
“The Stronger Country Communities fund delivers guaranteed investment in every single regional LGA in NSW, and has seen $500 million invested across more than 1900 local projects since 2017,” he stated.
“About half of this latest $100 million round will deliver 189 female sporting projects, including the construction or upgrade of female changerooms, additional amenity blocks and bathrooms, and playing surfaces like netball and tennis courts.
“It will also deliver hundreds of projects that make everyday life in the regions easier, for things like new playgrounds, clubhouse, art gallery renovations, streetscape, accessibility, lighting upgrades and community programs.”
Minister for Women Bronnie Taylor said the female sporting amenities projects backed by Round Four would make it easier for women and girls to be a part of their local sports team. “Better facilities and support programs that encourage greater female participation at all levels and across all sporting codes will go a long way to levelling the playing field for women,” she revealed. “Many of Australia’s elite female athletes started their career in regional NSW and we want to give the next generation every opportunity to discover, develop and hone their skills and prowess.
“It is so important that our female athletes have somewhere to change before and after training or on game day, instead of having to call in at home after work or getting dressed in a parked car.”
The Stronger Country Communities Fund is part of the $2 billion Regional Growth Fund, which alongside the $4.2 billion Snowy Hydro Legacy Fund is delivering infrastructure and programs that generate opportunities, investment and jobs.