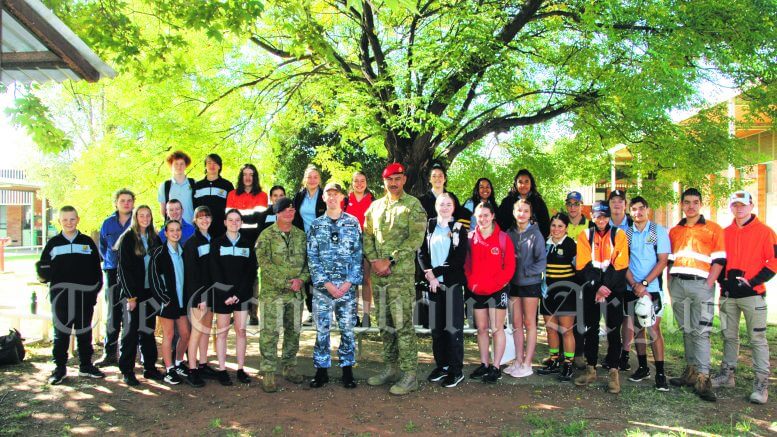 On Wednesday, 28 April three Defence Force Recruiters visited Condobolin High School to talk to students about the Australian Defence Forces (ADF) where they discussed with students their lives in the Defence Forces and also how to join. Image Credit: Kathy Parnaby.

Ben Kemp, Luke Goddard and David Boyd met with the students on the day.

“David and Ben both from the Army, and Luke from the Airforce, discussed with students their lives in the Defence Forces and also how to join,” a blurb in the Condobolin High School Newsletter Term Two, Week Four said.

“There are over three hundred different positions offered in the Forces, ranging from Apprenticeships in nearly every trade to Officer positions.

“Entry is either by general entry for the technical and non-technical trades and Officer entry through ADFA where a university degree can be undertaken.

“Apprenticeships are fast tracked in the Defence Forces, being completed in two years instead of the usual four. Students do not need their HSC to enter the Defence Forces but need a C pass in their Year 10 ROSA and ADF recommend the completion of your HSC.

“The wage is also very good with Apprenticeships earning $67,000 per annum.

“ADF also offer a GAP year and work experience. Steve also spoke about the recruiting process. The application process is through an online application form on defencejobs.gov.au

“An interview takes place in Parramatta in what is called a You Session where a medical questionnaire, and an aptitude test occurs. A Career Coach will then discuss the roles you can undertake.

The next process entails an Assessment Day, then a Physical Fitness Assessment and finally an appointment.”

Condobolin High School has had numerous students go into the Defence Forces, including Myles Taylor who recently attended the ANZAC March in Condobolin.

He is the son of Monique Seaton and Darren Taylor. Myles schooling at Condobolin High School two years ago. He joined the Army in March 2019 he is completing his trade training at Bandiana in Victoria. Myles is looking forward to his posting at Townville which is scheduled to happen in July 2021.