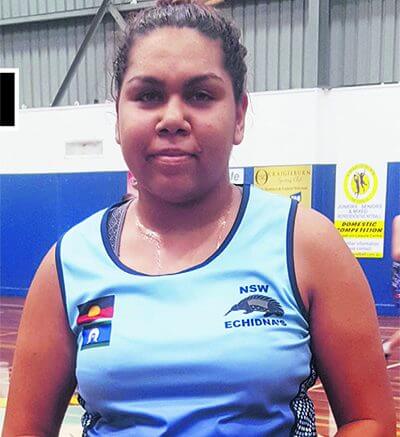 Rising young sports star, Danielle Hoskins,  has secured a place in the top U19’s Australian Indigenous Squad to represent Indigenous Australia at the International Schoolgirls Netball Championships to be held at Palmerston North in New Zealand later this year.

She will head to the land of the Long White Cloud in May, to represent her community and country.

In January this year, Danielle travelled with her family to Melbourne where she played for the U18’s NSW Echidna’s Netball team at the Australian Indigenous Schoolgirls Netball Championships (AISNC).

This competition was held from 7 to 13 January 2019, with every Australian state represented.

Every registered girl who participated was eligible to trial for the Australian Indigenous teams, with these teams being announced at the end of competition.

Danielle has been playing ever since she was old enough, and enjoys the challenge netball brings. She plays both ends of the court in defence and attack, and she gives her all in every game she plays. She learned her skills on local courts and honed her craft on a variety of surfaces and venues.

The extremely fit netballer has a level head and she knows achievements come through hard work. She is looking forward to doing her best as part of the U19’s Australian Indigenous Squad.

To help Danielle fundraise for her trip visit: https://asf.org.au/athletes/danielle-hoskins-selected- for-australian-indigenous-19s-netball-team-tour