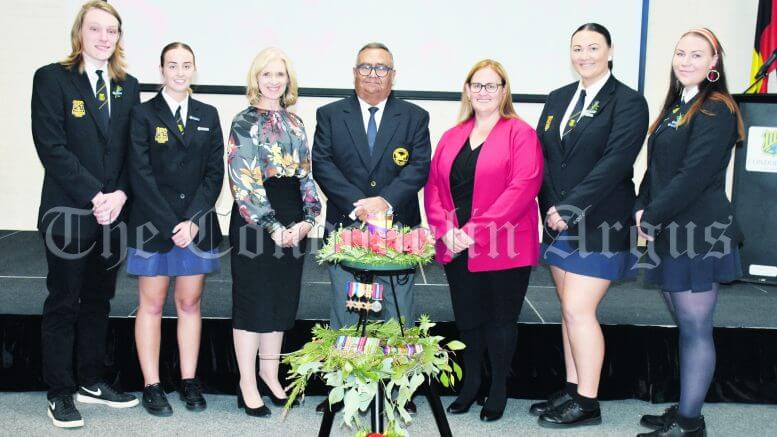 The Acknowledgement to Country was given by Shaylee Saunders and Billie O’Bryan. School Chaplain Ralph Martin said a Prayer for the Occasion.

Students Ryan Goodsell and Ladeisha-Lee Capewell laid a wreath on behalf of the School beside the representation of the Eternal Flame. Rob Neal, Pipe Band Major, along with Condobolin High School members of the Condobolin RSL Pipe Band played while the wreath was being laid. This was followed by The Last Post and a minute’s silence before The Ode was recited.

Kiara Kendall and Daniel Gile then performed the National Anthem.

Caitlin Keen and Darcy Hope gave the ANZAC Day address, which is printed in full below.

Caitlin: “It is at this time, near to the 25 April, 2021, that we, Condobolin High School, pause to reflect, remember and pay our respects to the service men and women of our country to commemorate ANZAC Day.

“Today we pause to honour the men and women, who served or are currently serving in all wars, conflicts and peacekeeping operations throughout the world. We remember those who have paid the ultimate sacrifice with their lives, for their country.

“It was during the Gallipoli campaign of 1915 that the ANZAC legend was born. A campaign of war, where 10 months, three weeks and two days, it was abandoned, and the land invasion was forced to withdraw as the campaign was at a stale mate.”

Darcy: “For the vast majority of the 16,000 Australian and New Zealand troops who landed at Gaba Tepe on the Gallipoli peninsula, later renamed ANZAC Cove, on that first fateful day, this was their first experience of combat.

“By that evening, 2,000 of these men had been killed or wounded, during the course of Gallipoli campaign the number of casualties were high on both sides and numerous lives were lost to the ravages of war.

“Although the Gallipoli campaign failed in its military objectives, the actions of the Australian and New Zealand troops during the campaign left a powerful legacy.

“The ANZAC spirit was born, the ideals of courage, endurance, heroism and mateship. The spirit of the ANZAC has held true and fast and is still very much relevant today.”

Caitlin: “War is a complicated way to fight against the injustice of political or religious democracy, including unjust acts of mankind.

“Yes, ANZAC Day is a day to mourn the loss of life our servicemen and women. To mourn the physical and mental damage done to our returned soldiers through all hostilities of war.

“There is no glory in war. However, the traits that were, and still are displayed in conflicts around the world, by our Diggers; those of bravery, ingenuity, endurance and mateship must also be remembered, with both pride and respect.

“So, today, we honour the sacrifces and heroism of those men and women involved, those who gave so much for our freedom.

“In today’s world we are often asked, why we place so much emphasis on war and glorifying its history.

“ANZAC Day isn’t about hnouring wars as such, but about honouring and remembering the men and women who fought, and are still fighting in these wars.

“They went to the battlefields for their families, for their country and for us, their descendents. They were outgoing and brave, they made the ultimate sacrifice so we could have a free and safe future.

“This ANZAC Day, let us commemorate and unite as a nation to remember all those who gave so much for the freedoms we enjoy today.

“We will remember them. Lest We Forget.” 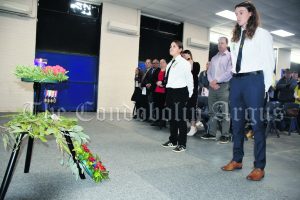 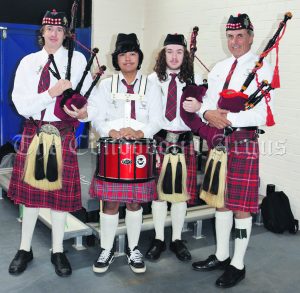 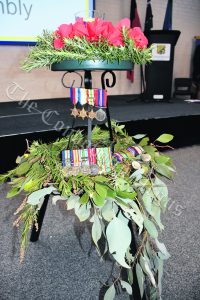 The representation of the Eternal Flame, which also showcased medals from those who had served in conflicts. Image Credit: Melissa Blewitt. 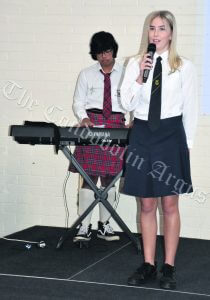