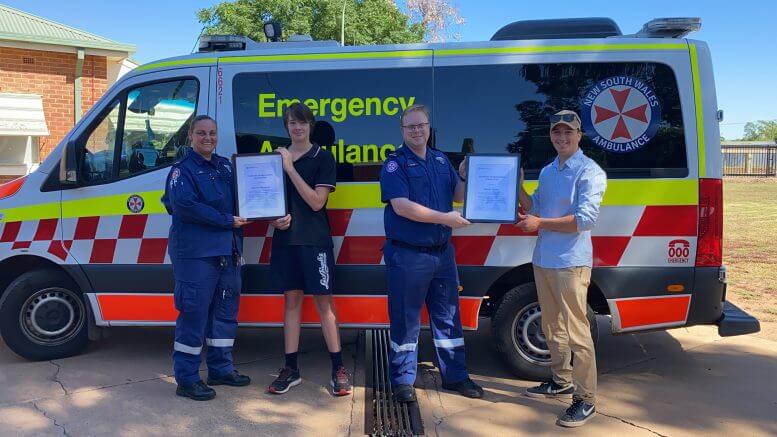 The citation on the certificates reads:

“On the 13th of December 2018, Nnoah Turner and Connor Thompson were on a school bus on the way to Condobolin with nine other students on board when the bus driver suffered a medical episode and was incapacitated. The bus struck a tree on the side of the road at moderate speed, coming to an immediate stop.

“Nnoah and Connor acted immediately by calling Triple Zero (000), evacuating their fellow students from the bus to a safe spot on the side of the road, rendering aid to the driver and supervising the other students until emergency services arrived on scene, as well as contacting the parents of the students on the bus.

“The two young men showed a great sense of what to do, remaining calm throughout and clearly communicated to emergency services on arrival.

“NSW Ambulance commends Nnoah and Connor for their quick thinking and courage during a challenging and difficult situation.”

Station Officer, Condobolin Station, David Truscott, said both boys acted calmly during a time of crisis and are to be commended for their actions.

“They took the situation in hand and stayed composed during a very challenging time,” he stated.

“They acted courageously and deserve to be recognised with an Ambulance NSW Certificates of Appreciation (Community).”