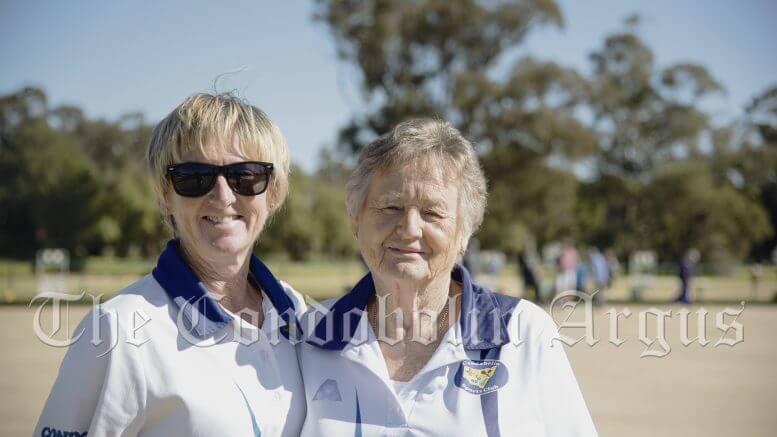 Cathy Thompson (left) was the winner of the Minor Single title. She was victorious over Joyce Kendall (right). Image Credit: Kathy Parnaby.

B Field, C Helyar and P Nicholl had a 18 all draw with M Willcockson, L Baker and M Iffland.

Parkes had two wins and a draw to win the Jones Trophy. The next challenger for the Trophy will be Forbes, this will be played in Parkes.
Congratulation Parkes.

No Social bowls was played on Thursday 5th August due to the weather.

Sunday 8th August, Wendy Ryan and Zena Jones played their game in the Consistency Singles. This game went from Zena with the lead, then Wendy would lead, both players producing some great bowls. After twenty five ends, Zena started to draw away, producing some high scoring ends. Zena taking the win after twenty eight ends, Zena 150 points Wendy 130 points.
Thank you to Pauleen Dimos for marking this match.

The final of the Minor Singles between Cathy Thompson and Joyce Kendall was also played on Sunday.

Anyone that bowls regularly will agree, “that sometimes we play like a champion and sometimes we wished that we had stayed at the 19th hole”.

Congratulations to Cathy Thompson on an outstanding game.

Thank you to President Colleen Helyar for marking this final.

This Thursday 12th is Condobolin Sports’ Gala Day, players are requested to bring a Spider gift to the value of $5.00, morning tea 9.30am, play commences 10.00am.

Our luncheon will be catered for, it will be a roast and veggies, alternate beef and chicken, and sweets.