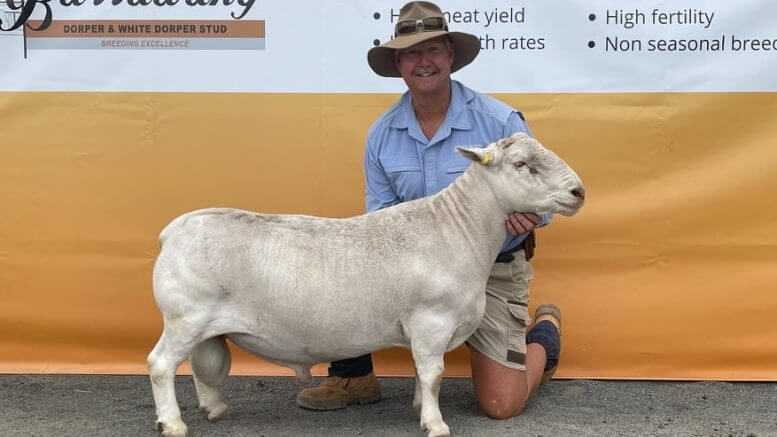 When buyers trek over 3,000km across Australia to secure the two top priced rams at Burrawang Dorper and White Dorper Stud’s latest ram sale, the value of these highly sought-after genetics cannot be disputed.
With an unmatched line-up of 210 dorper and white dorper rams, the consistency of quality on offer was evident to buyers on-farm and online. “Burrawang’s bloodlines have a long-standing reputation for delivering breed excellence which results in high returns for our stud and commercial customers. This line-up of over 200 rams of such consistent high-quality is a credit to our Stud Master Wicus Cronje. He produced the best offering of rams we have ever presented,” said Burrawang Stud Principal, Graham Pickles.
Top price buyers at this sale were brothers James and Luke Hardwick who jointly managed their family’s lamb and beef processing, retail and export business located in Kyneton just north of Melbourne. Founded in 1973 by Gary and Vicky Hardwick, the Hardwick family ran Hardwick Meatworks for almost 50 years and witnessed first-hand that the dorper carcass is unrivalled in the abattoir for meat yield and carcass quality.
Guided by their experience of slaughtering over thirty-four thousand lambs per week, the Hardwick’s decision to invest in the dorper breed was well informed by qualitative and quantitative data collected during their time as abattoir operators. Armed with this knowledge, the Hardwicks have established their own dorper stud, Deepdale Dorpers, located at Toodyay in Western Australia. As part of their commitment to operate their stud with the same principles of excellence they used to run Hardwick Meatworks, Luke and James Hardwick chose to invest in the highest quality dorper genetics available. Their purchase of Burrawang ex-sire TRUMP, white dorper 191472, set a world record price of $62,000, smashing the previous world record price by $12,000. Deepdale Dorpers also secured other Burrawang ex-sires including COWBOY, dorper 191253, for $42,000, and MARKSMAN, dorper 191354, for $26,000, along with five other dorper and white dorper rams.
The Cullinan family of Dust N Rain Dorper and White Dorper Stud based at Pooncarie, was the under bidder on TRUMP but was successful in their pursuit of one of TRUMP’s sons, Burrawang White Dorper 210884, for $18,000 and of Burrawang ex-sire FOSTERS, white dorper 190525, for $31,000. The Cullinans recognised the value of Burrawang genetics many years ago and have since realised a significant return on their investment, achieving the second-highest breed sale average, a second only to Burrawang itself.
In 2018, Gary and Janice Fiegert of Melashdan White Dorper Stud in Tumby Bay SA, bought Burrawang ex-sire KEG. KEG is now ranked as the top sire in Australia by MLA’s Sheep Genetics, according to recently released LambPlan ASBV index listings for all shedding breeds. KEG’s MCP (Maternal Carcass Production Index) of 159.74 is over 5 points higher than the next highest MCP index. The value created for Melashdan’s stud operation by using KEG and other Burrawang rams purchased over the past four years, has brought the Fiegerts back each year. This sale saw them successfully bid for three Burrawang rams to further strengthen their stud breeding program: a PISTOL son and two CARLTON sons.
Long standing local stud customer Tullinga White Dorpers, was one of many return customers at the sale. Stud owner Hamish Wald was particularly happy with his purchase of three white dorper rams: a TRUMP son, a CARLTON son, and a PHILL son.
Mr Wald is excited that “the first lambs on the ground at Tullinga, sired by Burrawang’s DUSTY and BATTLESHIP, show terrific growth and thickness. At a time of change into shedding breeds, Burrawang is flying the flag for the breed. We’re very fortunate to have them on our doorstep in the heart of sheep country at Condobolin.”
Overall, the 19th on-farm ram sale saw 100% clearance at an average price of $5,751. Mr. Pickles emphasised that the sale catered for all buyers. “The average was high largely because there were keenly sought, high-value genetics in the ex-sires we chose to offer. Most of these rams were purchased by stud breeders chasing those genetics. Many of the rams offered were high quality animals that sold from $2500 to $4000, prices that enabled commercial breeders to fill their volume needs,” said Mr Pickles. “We plan to offer a similar number and range of quality rams in our next sale on October 10th. That sale will be our 20th on farm sale. Burrawang and dorpers have come a long way in the last 20 years. We’re excited about the future of this proven shedding breed and the difference it is making to the profitability of commercial sheep breeding in Australia.”
For a comprehensive outline of the history of the dorper breed which is underpinned with research and evidence-based trials, please visit the Dorper Sheep Society of Australia website, click on About Dorpers and select Starting Up.
Press Release. 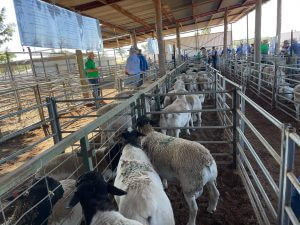 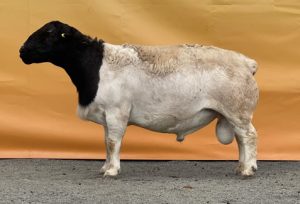