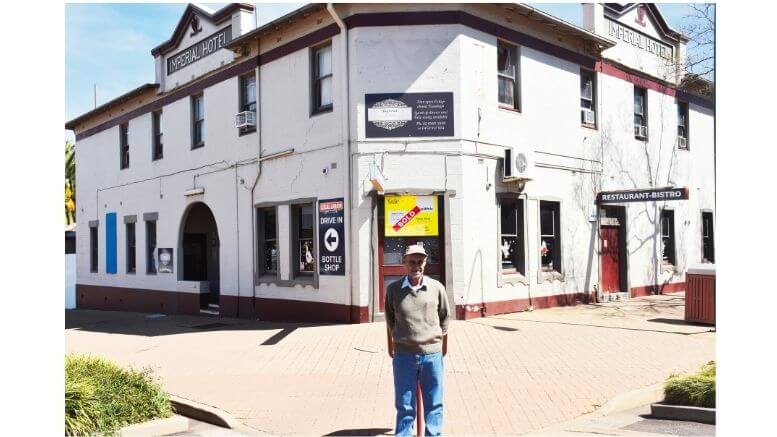 Fred Vella, the new owner of the Imperial Hotel in Condobolin, has big plans for the iconic building. First on his extremely lengthy to do list is painting the exterior of the building, improving its streetscape appeal. Image Credit: Melissa Blewitt.

Fred Vella has big plans for the Imperial Hotel in Condobolin.

As the owner of Mulguthrie Station, near Condobolin, he has strong ties to the local community and is determined to restore the hotel to its former glory.

He is passionate about ensuring the longevity of the building and preserving it for future generations.

“It has a long history, the Imperial Hotel,” he declared.

“Back in its heyday, it was the place to be. I want to bring it back so it can be enjoyed by the entire community and visitors to the town.”

First on his extremely lengthy to do list is painting the exterior of the building, improving its streetscape appeal.

Then he will move into other parts of the iconic building.

“It’s going to be a big project, but it will be worth it in the end,” Fred explained.

Fred is currently undertaking the mammoth task of cleaning out the Imperial Hotel, and getting the electrical wiring up to date.

It has been nearly three years since the Hotel was operational in some capacity, and Fred is working on aspects of the project one step at a time.

“Just cleaning up has been a big job so far,” he said.

“There’s years of stuff that has needed to be taken away and disposed of. But it is one step at a time every day.”

He will also open up the Drive Through, as part of his first phase of plans.

“It’s been a while since Condobolin has had a Drive Through and I am planning on having that operational as soon as I can,” Fred said.

A positive for Fred, is that the kitchen and its appliance are in relatively good condition, and will only need a good clean.

“I won’t have to replace much in the kitchen, so that is a good thing,” he stated.

Fred wants to be able to offer the Condobolin community an alternative eating venue, so he will be working towards opening the kitchen and serving meals.

In fact, he wants to open up the downstairs section and perhaps even move the bar.

“I have been thinking if the bar was moved to face the outdoor eating space, that would be a nice design aspect for the hotel,” he revealed.

“The old bar is in the front section at the moment, but that could become something entirely different.

“It makes sense to have the bar close to where people can access it when they are having a meal.

“I plan to put a roof on the outdoor dining space, so it will be enjoyable to eat even in Condobolin’s hot weather.

“I can see it being a very pleasant place to have lunch or dinner.”

There are 20 rooms located upstairs, and most at the moment are in disrepair. However, that hasn’t phased Fred for one moment.

“The building has very good bones,” he said.

“It may not look very pretty but has potential and that is the key. I am not sure if I will keep the 20 rooms as they are or design it so it has less rooms with more space. That is a thought process in progress.

“I am sure plans will adapt and change as we move along.”

There is no doubt this will be a huge undertaking, however, Fred will not be pushed into committing to an end date for his project.

“I don’t have a timeline to complete the project. I will finish when I finish and it will get done right,” he concluded.