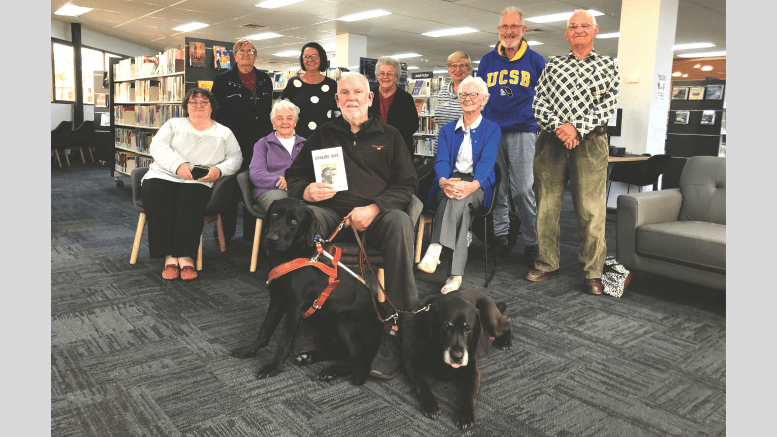 Dogs are not a common sight in public libraries, but Cootamundra author Ross Fitzell and two shiny black labradors kept an audience spellbound for an hour and three quarters at West Wyalong Library on Tuesday April 13.

Mr Fitzell, 75, has been blind for the past 11 years since he was stricken with a rare auto-immune disease known as Giant Cell Arteritis, which arises when the body’s immune system produces large red cells that damage the optic nerve cells that convey information from the eye to the brain.

His guide dog Harry has helped him navigate a world of complete darkness for most of that time, and Mr Fitzell’s book, Barking Mad, has been written from Harry’s point of view—so much so that the author’s name on the front cover is simply “Harry”.

Mr Fitzell wasn’t fooling anybody, but he introduced his talk by saying that when Harry got up that morning he said “Boss I’ve got some bad news, I’ve got a little bit of laryngitis”.

“So he’s asked me to speak on his behalf, so I guess I can manage to do that – so we’re here to talk about Harry’s book.”

Harry, now nearly 12, retired from his duties as Mr Fitzell’s guide dog only a few weeks ago, and has been succeeded by a new guide dog, Pluto, just two years old and now settling in well to his new role.

Harry is staying as a pet in the Fitzell household, and the two dogs have quickly become the best of mates, with Harry quickly accepting that when “The Boss” goes out with Pluto, he stays at home.

The audience of only nine West Wyalong people was enthusiastic but small, a result of the fact that the local paper is temporarily not in print due to a change of ownership.

The trio’s appearance at West Wyalong is the first in a series of talks “Harry” will be giving.

Barking Mad, launched in November, has been selling so well that the first run of 200 has sold out, another 100 have been printed in a second run, and Mr Fitzell is now planning a third print.

The book is beautifully illustrated with cartoons by Alan McClure, now 98, who was the editorial cartoonist for the Sydney Morning Herald for many years.

“It’s pretty professional stuff, except that the words in it have been written by a dog, in consultation with a little uneducated boy who went to a country school near Dubbo with only 10 kids in it,” Mr Fitzell said.

“The best thing about going blind of course is that I wouldn’t have met Harry and Pluto if I hadn’t have gone blind.

“It was a pretty sharp learning curve for me. Because I was pretty enthusiastic I was allocated a dog in short order—I got Harry on the 2nd of November 2010, so he’s been my dog for 10 years.

“Pluto appeared on the 28th of February this year. We trained together for a month and he’s still very much in training.

“They’re very different dogs – Harry is much more assertive, even though he’s nearly 12 now, which is a fair age for a guide dog, they normally retire at 10.

A couple of days after he was stricken blind, a doctor at St Vincent’s Hospital said he’d had hundreds of patients who had Giant Cell Arteritis, but once it’s diagnosed it doesn’t get any worse.

He said he had never had a case of a patient going totally blind, but he’d read about one, Ray Charles the American singer.

“So I just said to the doctor, ‘so what you’re really telling me is that if Ray Charles and I are up on stage together singing you wouldn’t be able to tell us apart, would you?’ … he thought that was funny.”

Barking Mad is a hilarious and fascinating read, ranging over all kinds of topics including Harry’s adventures and travels with his Boss, the ridiculous NDIS provisions which cut out a lot of financial assistance to people over 64, the dangers of crossing intersections when drivers won’t give way (the pair have been hit, fortunately not seriously, by vehicles five times), and “Harry’s” opinions on a variety of political subjects.

It’s excellent value at $20. Mr Fitzell is delighted with how well it’s sold already and hopes many more will be sold—all profits go to the Guide Dogs Association, with Mr Fitzell commenting “it’s the least I can do to repay Harry for his 10 years of wonderful service”.

And Mr Fitzell revealed that in retirement Harry is busy writing a sequel, with the first few chapters already completed.