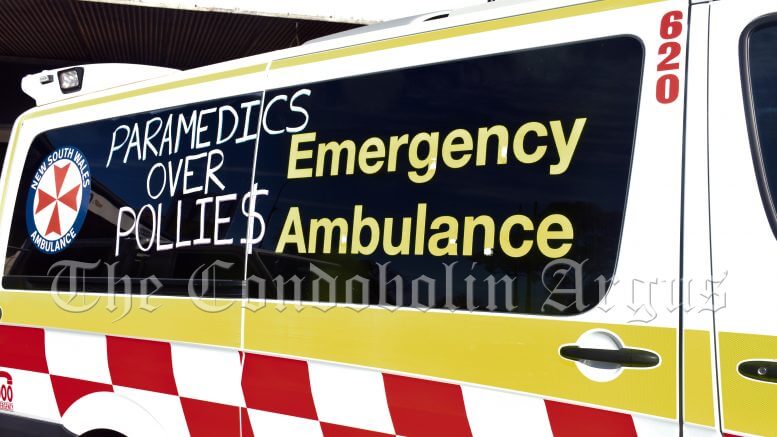 The Australian Paramedics Association NSW members including those in Condobolin are taking action against what they see as an unfair wage increase. They have voted to chalk their ambulances as part of the industrial action campaign. Slogans seen on Condobolin ambulances include “Overworked and Underpaid”, “Lives over KPI’s” and “Paramedics over Pollie$.” Image Credit: Melissa Blewitt.

The Australian Paramedics Association NSW members including those in Condobolin, have voted to chalk their ambulances as part of their industrial action campaign to highlight the need for a fair wage increase from the NSW Government.

Slogans seen on Condobolin ambulances include “Overworked and Underpaid”, “Lives over KPI’s” and “Paramedics over Pollie$.”

The action began on Monday, 7 June and will continue until Wednesday, 9 June.

The APA NSW are protesting against what they see as “an effective pay cut” even though paramedics play a crucial role in patient care and saving lives.

“We have, for years now, had empty thanks from the NSW Government. This year those empty thanks came with an effective a pay cut. We deserve better, so let’s demand it, together,” a post on the Australian Paramedics Association NSW Facebook Page on 7 June read.

APA NSW consider the 1.04 per cent wage increase offered to be “an insult” to those who play a pivotal role in helping others on a daily basis. During the time period members will also not report on Key Performance Indicators (KPI’s) via the Electronic Medical Record (EMR) but will use free text only.

“NSW Health have failed to respond to this demand.

“We will not be reporting on KPIs in the EMR (use free text only), and will be chalking ambulances. Our action lets the public know how undervalued we are and targets the one thing we know NSWA values: KPIs.”

Stop Work Action has been planned for 10 June, however, APA NSW is not directing its members to take part as it may pose a risk to professional registration.

“It is fair to ask why we are not directing our members to undertake the stop work action planned for June 10 2021. We have received independent legal advice that refusing to respond to patients in pursuit of a wage claim poses a real risk to professional registration. Additionally, relaying on the ProQA system ,which APA (NSW) has been critical of for some time, may put the community at risk,” a post on the Australian Paramedics Association NSW Facebook Page on 4 June said.

“APA (NSW) will support any member who takes this action, but we believe every member should be able to make an informed decision about this risk.”