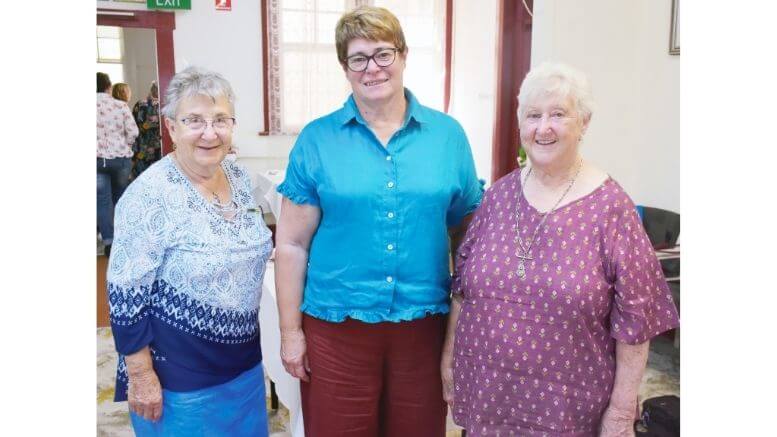 CWA of NSW President Stephanie Stanhope dropped into town to visit with the Condobolin, Kiacatoo and Myamley branch members on Monday, 9 November.

She met and spoke with Condobolin and Kiacatoo CWA branch members at a special morning tea at the Community Centre, then travelled to Jeanette Manwaring’s (Myamley member) home for lunch and then spent an evening with Myamley member Patrisha Hurley.

Local branch members welcomed the opportunity to meet and discuss pertinent issues with the State President.

Ms Stanhope, is from the Bega branch, Far South Coast Group, and took office at the CWA of NSW at the annual state conference in Albury in 2019.

In her role she oversees 400 branches and around 8,000 members. Ms Stanhope took over the role from Annette Turner of the White Cliffs branch who served in the role for the previous three years.

The Numbugga resident and former dairy farmer joined the CWA 14 years ago, when the Bega branch was in danger of closing down if they could not find a treasurer.

Ms Stanhope, who was the treasurer of her local church at the time, stepped into the role and saved the day.

Since then, she’s been branch president, held various positions at group level and was state vice president of for three years, finishing up that role in 2018.

The CWA was formed in 1922 when country women were fighting isolation and a lack of health facilities. Within the first year, the Association was a unified, resourceful group that was going from strength to strength.

The members worked tirelessly to set up baby health care centres, fund bush nurses, build and staff maternity wards, hospitals, schools, rest homes, seaside and mountain holiday cottages – and much more. The women of the CWA have been initiators, fighters and lobbyists.

They have made localities into communities by providing social activities and educational, recreational and medical facilities.

The CWA is the largest women’s organisation in Australia and aims to improve conditions for country women and children. They reach that aim in various ways including lobbying for change, helping the local community, creating a network of support and meeting together in towns and cities.