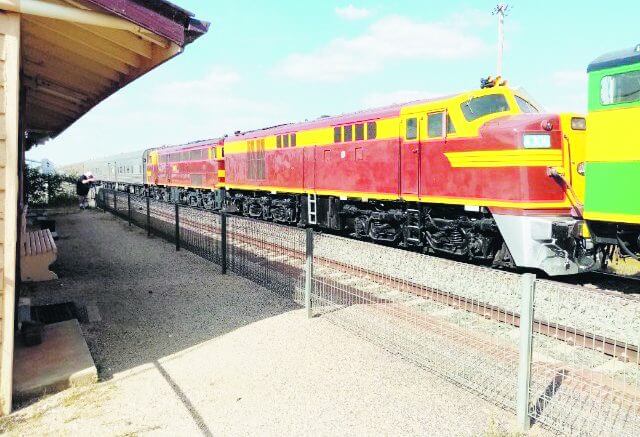 St James Rail passengers aboard the Southern Aurora, made their way through Condobolin on Wednesday, 28 April.

They were able to explore and taste gourmet foods and wines of the Riverina, Central West and Upper Hunter, as well as the scenery of the Illawarra with the climb through Summit Tank to Moss Vale; the Warrambungle Ranges and Siding Spring Observatory; the Liverpool Range and Brisbane Waters.

They marked ANZAC Day in the Riverina town of Coolamon as they saluted the Honourable Tim Fischer AC, who has been a traveller with St James Rail over many years.

Mr Fischer joined SJR on many occasions aboard the St James Rail Southern Aurora Anzac tours – speaking at the 50th Anniversary of the Southern Aurora in Melbourne; with the Bishop of Port Pirie in South Australia; with hundreds of locals at Yarrawonga in Victoria; and launching his memoirs as Australian Ambassador to the Vatican aboard St James Rail’s Southern Aurora as it travelled in Western NSW. Passengers revelled in the great scenery of areas not normally seen by passenger trains. They were able to watch the world pass by from the lounge car and dine on fine meals and tasty local produce.