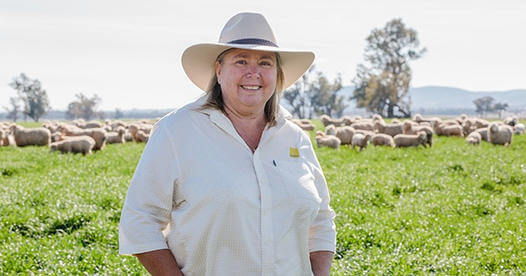 She is ranked in the top one percent of Ray White agents nationally and has over 20 years experience.

While she is based in Forbes, she conducts business all over the country, including Condobolin, ensuring her clients have a skilled negotiator and advisor in their corner.

Kim says there are four key attributes that underpin my approach to broad acre sales and that have helped me achieve and maintain success in the industry.

The first is geography is no barrier. “Whilst proudly based in Forbes, I have sold numerous multi-million dollar aggregations for corporates, families and individuals from Kununurra in Western A to Ararat in Victoria,” she said on raywhiteparkes.com.au

The second attribute is farming and family values. “My husband and I run a 4,700 acre mixed dryland farm west of Forbes. We judge and show at sheep shows nearby and interstate, meaning we are constantly networking,” she reveals on raywhiteparkes.com.au

Thirdly, the proof is in the sale.  “I’m perhaps best known for my ability to source aggregations for buyers and complete deals that are not ordinarily available to the market. I’ve done this on numerous occasions: from a $45million 6-property Western Districts Victorian sale to a 20-property 60,000 acres Northern NSW sale for $60-millions,” Kim disclosed on raywhiteparkes.com.au

The fourth important attribute is extensive expertise and privacy is paramount. “The sensitivities around corporate deals and broadacre purchases are significant, and my ability to secure repeat clients is directly aligned with my ability to negotiate with discretion. Corporate buyers can be subject to price inflation if their identity is revealed, thus total confidentiality is paramount. I am proud to be renowned for this,” Kim expressed on raywhiteparkes.com.au