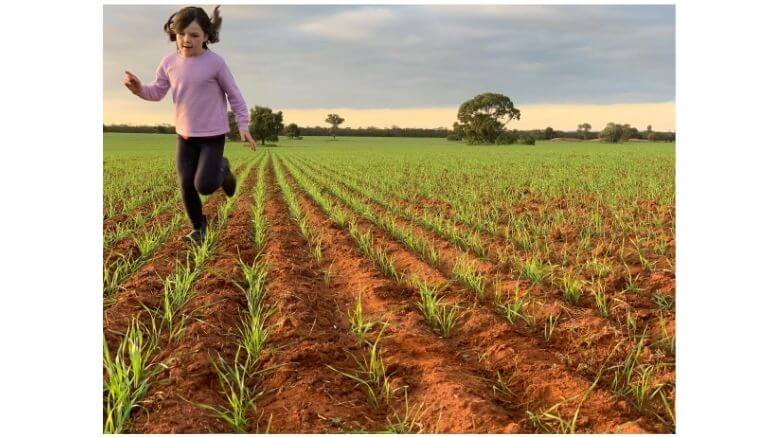 A wheat crop from the Kiacatoo district, near Condobolin, has emerged and is growing after welcome rainfall in the area. Emmaline Blewitt runs through the growing crop. Image Credit: Melissa Blewitt.

Farmers across the Lachlan Shire have had a good start to 2020, with many able to undertake their sowing programs thanks to welcome rainfall.

The paddocks have transitioned from brown to a sea of green as crops emerge from the ground.

Producers will have even more to smile about if the forecast predictions from the Bureau of Meteorology (BoM) come true.

While a La Nina is not a certainty, this means there is now around a 50 per cent chance of one forming in 2020. This is double the normal likelihood of a La Nina occurring in any year.

Bureau manager of long-range forecasting Doctor Andrew Watkins said changes in the surface temperature of the tropical Pacific Ocean indicated a rise in the chance of a La Nina event this year.

“Tropical Pacific Ocean surface temperatures have cooled in recent weeks, and models suggest this cooling will continue through winter and into spring,” he explained.

“Temperatures in the top 150 metres of the tropical Pacific are also cooler than average. This means that the surface cooling is not likely to disappear quickly.”

But Dr Watkins noted that a cooler Pacific Ocean is only part of the La Nina equation.

“This cooler ocean joining forces with the atmosphere is the cause of changes in global weather patterns,” he advised.

“Other indicators of La Nina, such as stronger trade winds and lower air pressure over Australia compared with the central Pacific, have yet to appear. Once we start to see a change in these weather patterns, the likelihood of a La Nina event will increase much more. And it also increases the chance of a wetter second half of the year for Australia.”

It also brings cooler days, more tropical cyclones, more snow and an earlier onset of the first rains of the wet season across the north.

The last La Nina to have a significant impact upon Australia lasted from 2010 to 2012.

The initial phase of the event in 2010-11 was one of the strongest La Nina periods on record. As a result, the 2010-12 La Nina event saw Australia’s wettest two-year period, with widespread flooding in many parts. The year 2011 was Australia’s coolest on record in a decade (2001-11).