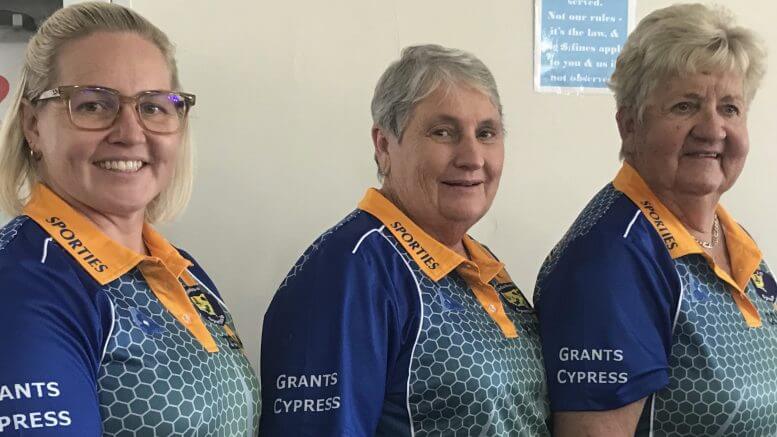 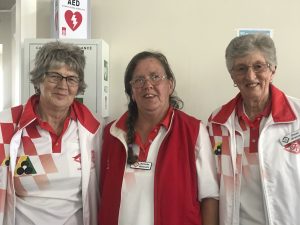 Val Edwards, Belinda Melmoth(S) and Pam Breust (Temora Recreation) were the Runners Up at the Condobolin Gala Day. Image Contributed.

Thursday 12th August was President Colleen’s Gala Day. Nine clubs travelled to Condobolin to join in a great day of bowls and friendship.

District President Pam Nicholl had her team of Janelle Taylor and Beryl Field, Pam’s team finished with a win +15.

Winners were President Colleen‘s team of Zena Jones and Yvonne Johnson, a win +19.

A gold coin donation Spider was played before the commencement of the day’s bowls. Nearest to the Spider was Val Edwards, nearest to the Presidents bowl was Zena Jones. Monies received will be donated to local CanAssist.

Thank you to Vince and his staff for the beautiful baked lunch.

“Expression Of Interest” are requested to fill vacant positions on the 2021/2022 Committee of the Condobolin Sports Womens Bowls. Three are required for our Selection Committee and one Publicity Officer.

Letters are to be received with the Secretary, WendyRyan, no later then Wednesday 25th August.

There will be NO bowls until this lockdown in Regional areas has been lifted, Bowls NSW advises that bowls has not been granted an exemption as a recognised form of exercise!

Get well wishes to those on the sick list and the others can find a “recognised form of exercise”.