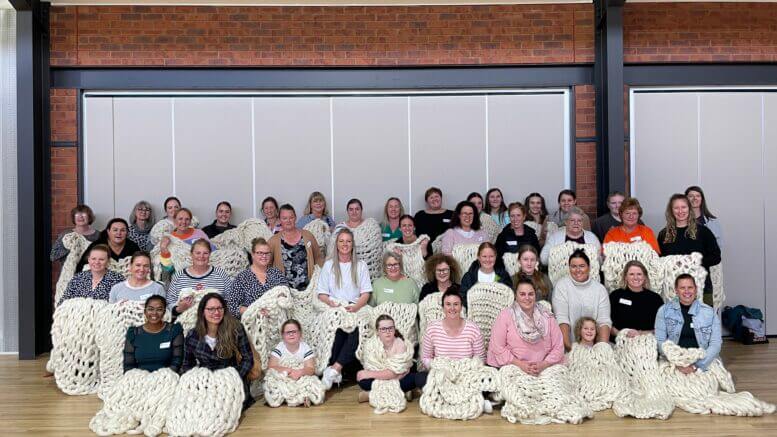 Ohhbulldust founder Samantha Longmore may have been feeling tired, but her heart was full after conducting two knitting workshops in Condobolin on Saturday, 28 May.
She left her home in the Yass Valley at 2.45am to travel to Condobolin, where she enjoyed chats, stories, some great tucker plus overseeing many blankets being made by very enthusiastic locals.
Samantha’s story of resilience and mental health awareness is one that captivates her audience and enables conversations as the creativity flows.
“People are regularly shocked at how much I travel, and I generally tell them this … We, in the Yass valley are so lucky to have so many incredible experiences at our fingertips. The further out west you go you quickly realise the further the people have to travel for the THINGS, if I have the ability to share my knowledge, my story and teach a somewhat large group of women something fun why not just do that in their hometown?’ Right?” she wrote on a post on the Ohhbulldust Facebook Page.
“Plus, I get to see the countryside and maybe just maybe I’ll learn a thing or 2 from someone that may not have been able to travel to me,” the post went on to say. “I’m busted but gosh my cup is full. “I’d like to thank Sarah at Condobolin Landcare for making this happen and introducing me to such incredible women.”
Samantha has an incredible story to share – one night in 2013, Samantha crashed her car. On the way to hospital, her ambulance crashed too.
The date, 27 October 2013, is one Samantha will never forget.
After a long day of running on no sleep, and later backing it up with a shift behind the bar at the nightclub she worked at, Samantha drove home in the early hours of the morning. After stopping to pick up some food and fuel, Samantha got back on the road. But just 15 kilometres later, dozed off.
Samantha veered off the road, rolled her car and went through a six-foot pool fence in front of a tree.
Although she doesn’t remember, after the car flipped, strangers called an ambulance. And this ambulance had an accident on the same stretch of road with Samantha in the back, while enroute to hospital.
After the accident, Samantha was diagnosed with right side hemiplegia, meaning, she’s now paralysed from her neck to her toe on her right-hand side. She has no movement or feeling, as well as difficulties with her bowel and bladder.
At one point, Samantha was in a room full of people in hospital and lost control of her bowels – she was embarrassed, scared, and angry – but she knew the journey forward was one she was going to have to figure out on her own.
As weeks turned into months and then years, Samantha focussed on herself. She did a certificate in health and fitness and became a personal trainer. Then she slowly learned to draw and paint again. Soon that turned into knitting – something Samantha had never thought of doing before.
In her mid 20s, Samantha taught herself to knit with one hand and created some Merino wool wearable pieces which she began to sell. This led to Samantha creating her own Business, Ohhbulldust. She uses natural Australian fibres, she knits clothing, blankets, throws, beanies and scarves. She now also runs workshops for people, where they can learn her technique and create beautiful pieces of their own. 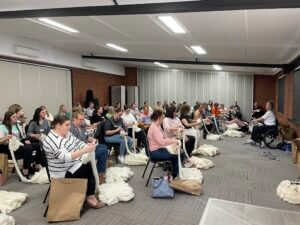 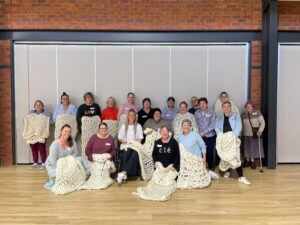 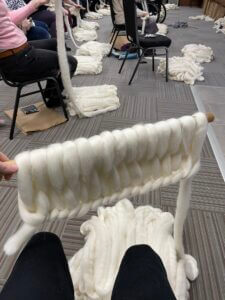