On Friday 20th May, Trundle Central School travelled to Tullamore to play against Tullamore Central School in the first round of Small Schools Soccer Knockout.
It was a great match on a slightly damp soccer field but the teams coped with the challenges. The first half of the game saw Tullamore with quite a lot of the possession of the ball but Trundle made some very smart moves, making the most of the times when they had possession.
Trundle team were able to score three goals in the first half. These were scored by Thomas Sanderson. The beginning of the second half showed both teams skills and possession of the ball was very even. Tullamore scored two goals in a row and the gap was closing. The pressure of this did not affect the Trundle team with Thomas Sanderson scoring two more goals and Cameron Strudwick scoring two. The final score was 7-2.
Harry Budd was an amazing coach, along with Mr Burley, who also drove the bus.
Source: Trundle Central School’s Newsletter. Image Credits: Trundle Central School’s Facebook Page. 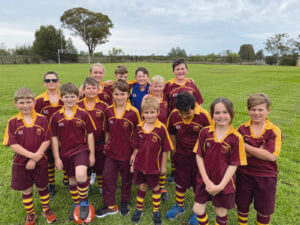 The Trundle Central School SSS Knockout Team. The students did an amazing job and will be moving forward to the next round. 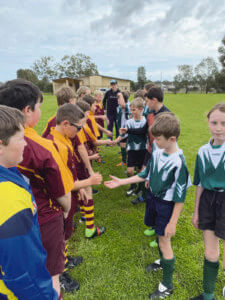