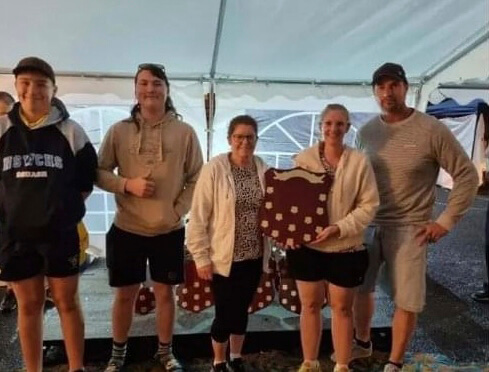 Jack Jones (second from left) joined up with some Parkes players to form the winning Men’s D-Grade side in the Dave Fuller Intertown Teams tournament. Image Contributed.

Squash
Condobolin Squash Club travelled to Parkes/Forbes during May to compete in the annual Dave Fuller Intertown Teams tournament.
The club has been participating in this event for some 10 + years and it is always an event where we see some great squash, friendly competition and some inspiring up-and coming Junior players.
Condobolin entered a Men’s and Ladies team with both enjoying some good results. The men’s team came up against an experience Parkes team in the final.
Darryl Nesbitt built his form over the weekend, playing his best game in the final and getting them off to an early lead.
Freddie ‘Fittler’ Donnelly was the team backbone right through the weekend, winning all his matches up until the final where he was just beaten.
Our Fearless leader Clint Ridley was perhaps a little out of condition and carried a sore head and ankle into the finals on Sunday.
However, luckily Mr Secretary, Nick Ridley, took charge and demoted Clint to the number two player in the final, ensuring the result went the way of the Condo Men. Both Nick and Clint getting the job done saw the Men’s team take home the C-Grade trophy.
The Ladies came up against Cowra in the final, with both Stevie Pawsey and Colleen Campbell doing their job, followed by Lisa McFadyen who had a bit of a slow start but came home strong in the last, only to be beaten on a count back.
Vickie Tyson was left with a bit of work to do however even though she won the match the Cowra Team had the points on a count back.
Overall, the club was well represented, and Condobolin took out the Combined C-Grade trophy as well. Special mention to Jack Jones, who joined up with some fellow Parkes players to form the winning Men’s D-Grade side on the weekend as well.
Players travelled from all over NSW & ACT with a total of 180 players taking to the courts over the 2-day event. Big thankyou to Jay and his team in Parkes and Forbes for hosting such a great event.
Contributed by Condobolin Squash Club. 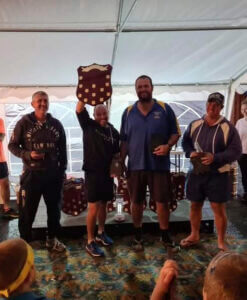 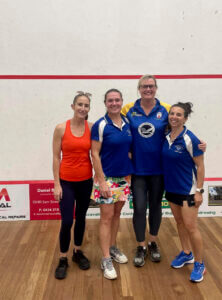