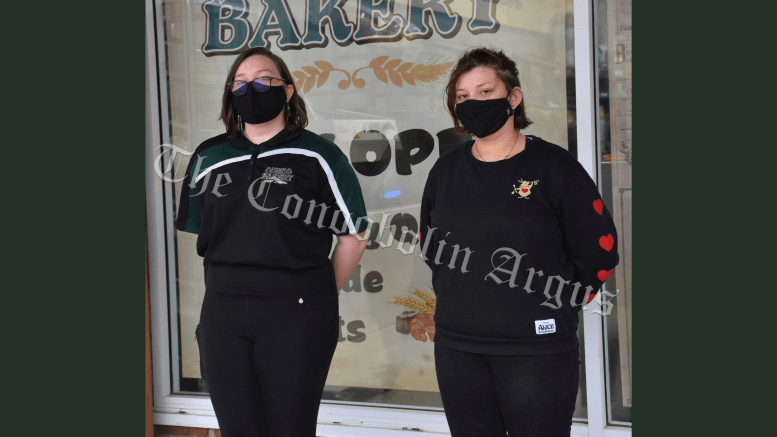 Close friends Catherine McDonald and Jessica Kiss share many things in common, including having a job at the Condo Bakery. However, on Sunday, 22 August Catherine’s cool head helped save Jessica’s life, when she went into anaphylactic shock. Image Credit: Melissa Blewitt.

Close friends Catherine McDonald and Jessica Kiss share many things in common, including having a job at the Condo Bakery. However, on Sunday, 22 August Catherine’s cool head helped save Jessica’s life, when she went into anaphylactic shock.

Catherine was serving customers at the Bakery when she noticed something was amiss with Jessica.

“I look over and see jess leaning over the one of the benches with her anaphylaxis plan sheet just reading it,” she said.

“Then I come back, and she said to me I think I am going into anaphylactic shock and I asked her are you sure?

“Because I thought she might have been dehydrated, because she looked dehydrated and it was a pretty warm day.

“Then she just starts getting worse, so I asked if she wanted her Epi Pen and then we called her mum.

“Jessica couldn’t talk at this point, so she handed me the phone. So, I described the symptoms to her Mum and she told me just to give her, her Epi Pen. So I grabbed her leg and twisted it around, I moved it around so I could see more clearly.

“In her daze, she says to me make sure not to get the seam. So I grab onto the seam and I pull it away.”

Jessica’s mum Jennifer Kiss pointed out that it you get the needle on the seam it tends to bend the needle and it won’t go in properly.

Catherine then stabbed the Epi Pen in the thigh area and raced to call Jessica’s parents.

“Jessica hands me her phone and I go into the storeroom and I dialed triple zero and called the ambulance. Halfway through my call with the ambulance, her parents turned up. The ambulance were asking about her allergies, so I just handed the phone over to them,” she stated.

“Then Jessica ended up laying on the ground and then the ambulance came. I tried to get onto Elaine and Ben like 20 times but the call wouldn’t go through, so I ended up getting through on Jessica’s phone. And then stand around and wait for the ambulance to arrive. Then they came and did their thing.”

Mrs Kiss said she was strangely calm when talking to 000.

“The operator was very good telling me to get Jess to just breathe and that help was on the way. But she admits she had never seen such a look of terror in Jessica’s eyes like she did on that day. It was not a very nice thing to go through,” she said.

“But after all that I still had peace about the whole thing because everyone did what they needed to do. Catherine did what she needed to do. We were here with her. The ambulance got here quickly and stabilised her.”

On Sunday (22 August) it was the first time Jessica’s parents and Catherine had seen her in full blown anaphylactic shock. She was diagnosed at 10 months old with severe allergies and severe intolerances, which made her high risk for anaphylaxis. Jessica must carry an Epi Pen everywhere just in case. There is even one in the fridge at the Condo Bakery.

Once the ambulance arrived and checked her over, Jessica headed off to hospital. She Spent most of the afternoon in hospital being monitored. She returned to work on Tuesday morning (24 August).

Catherine said she thought she would “be more freaked out” than she actually was during the emergency.

“I am not normally that confident and I was here by myself with Jessica so even worse. I couldn’t go and get anyone because I couldn’t just leave her there by herself,” she revealed.

There is still no diagnosis for what caused Jessica to go into anaphylactic shock. According to Mrs Kiss, Jessica’s list of allergies can change, even now, so she will always have to be extra careful throughout her life.

Although Jessica and Catherine went to primary school together their friendship is now cemented after the ordeal they went through together.

“I am very grateful Catherine was there for me when I needed her. It was no only a scary time for me but for her as well. She had never seen me like that and neither had my parents. I was so glad she was there to help me,” Jessica said.

Mrs Kiss said all she wanted to do was give Catherine a “great big hug” for doing what she did for Jessica.

All Condo Bakery staff have been trained how to use an Epi Pen and know that Jessica has an anaphylaxis plan.

“Ben and Elaine both have been fantastic,” Mrs Kiss said. “From the start they asked what could they do and what could other staff do. Everyone knows that Jessica has severe allergies and there may be times when things happen.”

Ben and Elaine said they were “so proud” of Catherine and her handling of a crisis situation.

“She deserves so much credit for staying calm and do everything she could to help her friend in her time of need,” they said.