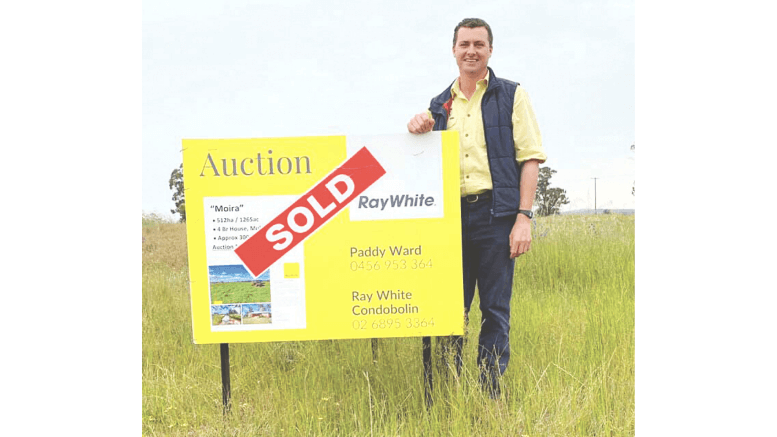 Australian farmland prices are continuing to show their resilience.

According to the Rural Bank’s annual Australian Farmland Values 2021 Report, the median price per hectare of Australian farmland increased by 12.9 per cent in 2020 – the seventh consecutive year of growth.

The Lachlan Municipality which includes Condobolin saw the median price per hectare for farmland come in at $1,873. There were 46 farmland transactions in Lachlan during 2020.

“The rural property market in the Condobolin district is booming, driven by low interest rates, favourable seasonal conditions and the migration of buyers from other areas seeking scale and opportunities to expand as they have been priced out of their local area,” he explained.

“There is an enormous pool of buyers with very little properties on the market.

“It is great to see such a turnaround following the drought and the district is prospering and I’m very excited to be a part of it all.”

At regional level, the Western and Central regions of the state recorded the highest growth in median price per hectare, increasing by 37.5 and 25.5 per cent respectively. Followed by the Southern and South East regions, increasing by 12.4 and six per cent.

In contrast, median price per hectare eased in Northern NSW, decreasing by 3.1 per cent. This was due to a 41 per cent increase in transaction volume, resulting in an influx of lower priced properties in municipalities which saw little activity in 2019.

This resulted in the seventh consecutive year of growth for the Central region. A return to favourable seasonal conditions led to a higher volume of listings which was met with strong demand as buyers moved quickly to secure land after a lack of buying options in 2019.

Local bidding wars over “that block that won’t come up again in my lifetime”, larger competitors with deeper pockets, and farmers from neighbouring districts swooping in and driving prices up even further are among the reasons suggested by the Report for the increase in values across NSW and Australia.

“In the North of the state drought conditions persisted into early 2020 before a break in the weather led to a significant increase in activity in cropping areas to the west of the region.

“The Central region was quicker to rebound, particularly in areas closer to the divide. In contrast, Southern and Western regions remained tightly held, areas impacted by bushfire saw a decline in sales activity while grazing land in the South East and cropping land in the Riverina was highly sought after.”

Alexandra Gartmann, CEO of Rural Bank said the report demonstrated that farmland continued to perform extremely well and reflected the underlying strength of the sector.

“Farmland values have risen strongly in every state of Australia and in many cases to levels not seen before,” she stated.

“Low interest rates and consistent commodity prices, coupled with exceptional seasonal conditions throughout 2020, have provided farmers with capital and an incentive to invest. These factors have proven to be powerful drivers in terms of demand for farmland.”

The number of farmland transactions in New South Wales increased by 24.8 per cent in 2020, to 3,073. Favourable seasonal conditions led to a large increase in transaction volume in the Northern and Central regions, increasing by 41 and 35.3 per cent respectively.

This was driven by the increase in the number of transactions in regions with traditionally larger parcel sizes compared to 2019.

The total value of farmland traded in New South Wales in 2020 was approximately $3.7 billion, a 19.9 per cent increase from 2020. This was driven by both an increase in transaction volume across the state and an appreciation in land values, according to the report.

The Australian Farmland Values report is based on actual farm sales using data collected by the official government agency in each state and territory, which is then compiled by PriceFinder.

The Australian Farmland Values report is a guide to market trends of commercial farming property. To that end, where possible, transactions between family members or where one party has compulsory powers are excluded from the analysis. Further, small farms are also excluded to limit the impact of ‘lifestyle farming’ on the results.

The annual Australian Farmland Values report tracks every farmland sale over the past 26 years, providing detailed insights into farmland values across Australia. The report drew on more than 263,000 transactions accounting for 315.9 million hectares of land with a combined value of $167.3 billion over 26 years.