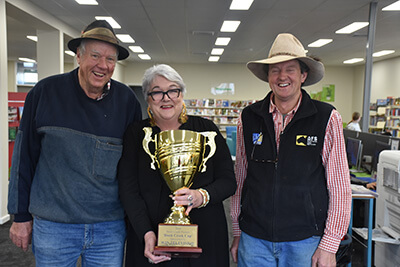 Not only did he win convincingly, he set a weight carrying record for the race. Gadfly was allocated  a massive 74 kilograms by the handicapper.

Gadfly had a great run at Duck Creek. Prior to this Gadfly won the Brewarrina Cup in May and the Noorama Cup in April.

David   Simmons   (Trundle)   and   Theresa Jude (Condobolin) are two of Gadfly’s local connections. They were both thrilled with Gadfly’s victory.

“It was absolutely fabulous,” Theresa said.

The Duck Creek Picnic Cup was run over 1250 metres, and this year had an eight horse field.