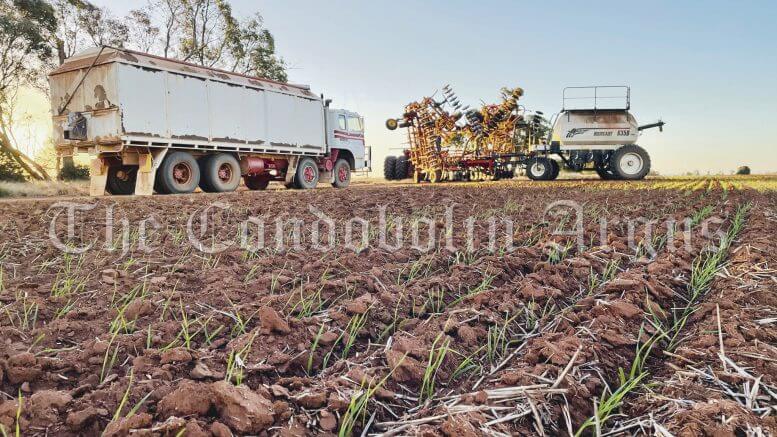 A forecast 22.93 million hectares of winter crop planting is expected across Australia including a massive six million hectares in NSW, according to Rabobank’s recently released 2021/22 Winter Crop Outlook report.

This is up two percent on last year – where planted area had soared on the back of a return to positive seasonal conditions around the country – and within one per cent of the nation’s record-high winter crop planting in 2016/17. This acreage also represents an area eight per cent above the five-year average.

The bank says this will see Australia on track to deliver an above-average winter grain crop for this season, with an estimated total wheat harvest of 28.9 million tonnes, barley of 10 million tonnes and canola of 4.1 million tonnes.

Report co-author, Rabobank grains and oilseeds analyst Dennis Voznesenski said with substantial rainfall and good soil moisture profiles across many parts of the country coming into this year’s planting, Australia was overall set up for another very strong winter grain crop.

“And with the Bureau of Meteorology forecasting a 60 to 75 per cent chance of the east coast and South Australia exceeding median rainfall for the next three months, this should set crops up well and have a positive impact on yields in those regions,” he explained.

For NSW, the report says, the state is expected to plant another massive six million hectares of crops this year (just 0.1 per cent below last year), with most regions planting a similar area to 2020.

“There may though be a slight decrease in winter-cropped area in major summer cropping regions, as farmers hold some paddocks to prepare them for summer planting,” Mr Voznesenski articulated.

He said the east-coast mouse plague continued to be a serious concern, with lost grain and hay reserves, downgraded quality of stock and increased costs to manage mice populations challenging grain farmers.

“The issue is particularly bad in, though not restricted to, central and western NSW,” Mr Voznesenski pronounced.

“With winter here, we can expect colder temperatures to slow mouse populations. However, crop replanting and a re-emergence of populations in spring remain real risks in the outlook.”

“While most regions had excellent opening rainfall, particularly in Western Australian and northern New South Wales, not all have been so fortunate,” Mr Voznesenski said. “In parts of South Australia and western Victoria, less favourable conditions have meant we will not be able to factor in a year-on-year increase in area planted in those regions, despite prices incentivising many other regions to expand total area,” Mr Voznesenski stated.

“So the forecast of further rainfall will be particularly welcome in South Australia and western Victoria, where the soil moisture profile was far less optimal than hoped for coming into planting.
“For Western Australia, conditions have been very favourable for the opening to the planting season due to the rainfall associated with Cyclone Seroja. So, while WA is only forecast to receive average to below-average rainfall in the next three months, the impact should be softened by the favourable soil moisture at planting.”

“With canola prices near record highs, and China’s tariff on Australian barley top of mind, farmers have heeded the call and switched in favour of canola,” Mr Voznesenski said. “Come harvest time, however, it may mean that there will be increased harvest pressure on local canola prices,´ Mr Voznesenski advised.

With tight global markets and the world looking for Australian grain, the report says, the nation will likely be in a position to respond, with above-average export availability expected in 2021/22.

Global prices for most grains and oilseeds are expected to remain elevated over the next 12 months, the bank says, on the back of strong demand and poor seasonal conditions in many other of the world’s grain-growing regions.

Domestically, Dr Kalisch Gordon said, Australian wheat track prices were expected to remain near to AUD 300 per tonne for the coming 12 months, with marginal strengthening in the first quarter of 2022. Australian feed barley track prices were forecast to trade at around AUD 250 a tonne over the same period, with some softening in quarter three 2021, and canola prices to remain elevated.

“Strength in the Australian dollar, which we forecast to continue to trade in the high US 70 cents range, together with strong local supply, will keep local prices at more modest levels than global price levels would otherwise support,” she revealed.

While 2021/22 was shaping up as a second consecutive very good cropping season for Australia, there were marked differences to last year, Rabobank’s report notes. And these will have price implications.

Mr Voznesenski said in addition to the shift in planted area from barley and oats to canola, a noticeable move was also being seen from non-GM (genetically-modified) to GM canola, particularly in Western Australia.

“With the premium for non-GM over GM canola declining considerably, we have seen a greater uptake in GM canola this year, with the biggest rise in WA,” he said. “With non-GM canola supplies tight around the world, this should support a rising premium for non-GM.” Similarly, Mr Voznesenski said, growers were also noted to be switching from malt barley to feed barley. “With less malt barley being planted and world malt demand recovering, we see the premium for malt barley over feed barley increasing this season from its lows,” he said.Another factor of note, Mr Voznesenski said, was that approximately 25 per cent of last year’s east coast grain harvest remained on farm in storage and this would weigh on prices.

“Until the stored grain is sold down, local prices will continue to be restrained from fully following overseas markets higher,” he said.

For wheat, Rabobank sees CBOT (Chicago Board of Trade) wheat trading near to US 650 cents a bushel out to quarter one 2022 then gaining marginally in quarter two – supported by a number of factors, including low global corn stocks.

A stronger Australian dollar and good local supply is however expected to temper local wheat prices this season.

A tight global corn market will also feed into support for barley in the coming year, Dr Kalish Gordon said.

“For Australian barley, pricing will continue to be reliant on the ongoing patronage of Saudi Arabia and Thailand,” she said. “With good volumes of new Australian crop expected in quarter four this year and no expectation of resumption of the barley export program to China in 2021 or 2022, local prices will be kept in check.”

Global canola stocks are on track to end the 2021/22 year at a five-year low, and the bank expects Australian canola prices to remain elevated.