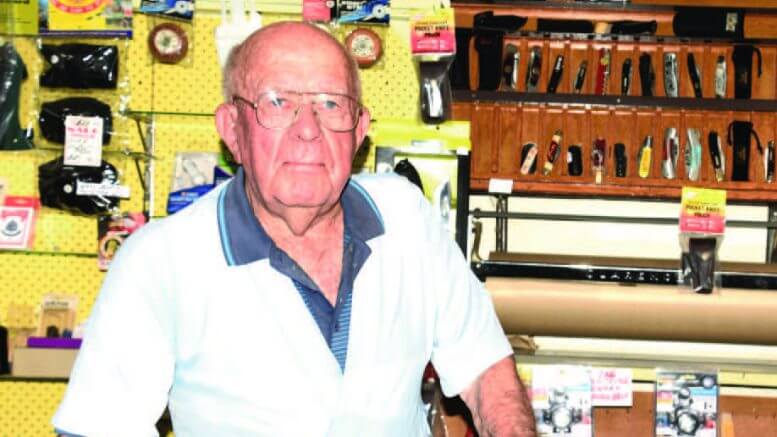 After 75 years as a local icon, 93-year-old Ray Orr is closing the doors on Ray Orr’s Gifts and Sports Store.
Arriving home to Lake Cargelligo in 1948 as a twenty-year-old, fresh from two years in Sydney studying men’s hairdressing, Ray joined his father Frederick (Ray) Orr in his barber’s shop in Foster Street.
“Dad opened the barber shop around the mid 1930s,” Mr Orr said. “He was on the farm for a while after he returned from World War One and then opened the business.”
“In those days the barber shop was just in the front portion of the building,” Mr Orr said.
“There was a billiard hall out the back.”
Mr Orr worked alongside his father until the senior Ray retired and Ray junior took over the reins.
“We expanded the business over time, adding a number of sidelines,” he said.
He and his late wife, Joyce, bought the building from Geoff Chamen and opened it up to become a giftware and sports store along with the barber shop.
Mr Orr said the business had been good to them.
“It was really good, we raised our family through the shop,” he said, “and we made some good friends.”
“We would love to have sold the business to keep the doors open, but that has not happened.”
Mr Orr believes a lot of the pressure on small businesses comes from online shopping.
“It has definitely had an impact,” he said. “This is a good little community so I urge people to support the local businesses whenever you can.”