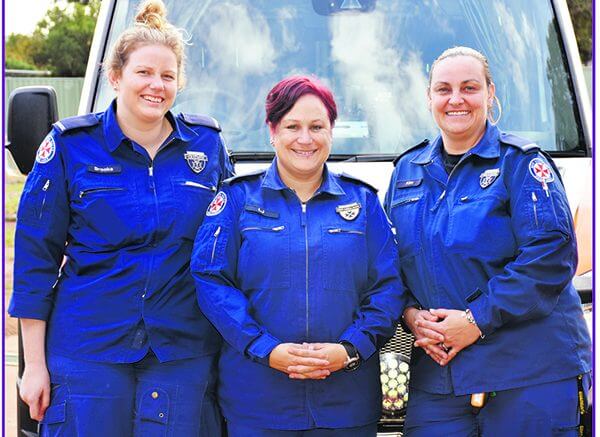 Female paramedics are being recognised by NSW Ambulance as it celebrates 40 years of women in active service.

Kim, who has been a paramedic for nine  years,  said  it’s  a  great time to be a paramedic in the NSW Ambulance Service, with a huge amount of opportunities available.

“I wanted to be a paramedic for years, I just never really had the opportunity to become one. Then the opportunity came along in 2009 to put an application in, and it all went through really well,” she explained.

“It’s always been a job I have wanted to do. When I was in the Army I worked in an  ambulance, so it was a natural progression for me.

“I have mostly worked in metropolitan  areas  before  coming to Condobolin. I did 12 months in a bigger regional centre, but spent most of my time in metropolitan centres, but decided I wanted a change.

“It’s a completely different job out here from metropolitan ambulance
services. That’s how I have seen it.” Kim and her family arrived in October 2017, and have settled into the Condobolin community.

“The community has been fantastic. Very welcoming and my husband Steve, and I have been able to settle our kids into School and Daycare. My husband has brought  his business to town, we have just bought a house, so we are really settled,” she said.

“We have become involved in sport, with Steve being President of Junior Cricket and even strapping on the boots for the rugby union side. We are  heavily  involved  in  soccer. I play netball and have met a lot people that way.

“We      really      have     ingrained ourselves into the local community,” “This is where we want to stay. So we have moved here as a permanent move for us. The town has been really amazing to us. The community has welcomed us with open arms. We are very thankful for that. I really feel like we have been here forever.”

LJ has been a paramedic for two years. She is from a small country town and wanted work and live in a rural area.

“This is my second year as a paramedic. I am still in my training period. I will qualify in September this year. I did not do a degree, but am becoming a paramedic through a vocational course. I use to work in control before I decided to become a paramedic. I was a call taker, answering 000 calls. I did that for about a year, then I decided I wanted to do something more. I applied to the Service and got in,” she stated. “I started in Condobolin on 2 February this year.

I was given a city posting first, to Northmead in Sydney. I am from a small country town, probably about the same size as Condo. I didn’t really want to go and live in the city.

“I liked the idea of being a country paramedic. It’s a whole different skillset out here. You’re more autonomous, more responsible, like the fact that we have a relationship with the community.

“Being able to know the people you are treating, they know you, there is a mutual respect and trust between each other. That was how I grew up, so it made sense to want to work in a country community. “My husband is a nurse at the Hospital and my kids go to the High School, so we are all settled in now.

“I grew up in a town of about 2,000 people, so it’s been an easy transition for me. Everyone has been lovely. I worked in bigger areas like Dubbo and Orange, prior to coming to Condobolin.”

Brooke, a former, Vet Nurse, has been based in Condobolin for the past 18 months.

“I have changed my career path many times now. I wanted to work with animals and did Vet Nursing, but found I was allergic to cats. I really wanted to do what I describe as a useful degree. I did my degree in Bathurst. I used to do SES volunteering, I like having practical skills, and wanted a job that could incorporate them. I also like engagement with the community,” she said.

“I am from a country town, but have worked in Queanbeyan and Liverpool. I am a country kid, so wanted a posting in  a  country  town.  Condobolin is a good little town, lots of sport and community things you can get involved in, so that really helps you settle in.

“It’s also great to have a professional support network in place. The nurses at the Hospital are lovely, and the Hospital has good services such as x-ray that some other country hospitals do not, which means we can tackle most things that are sent our way. If there is a big job coming in, then all health and emergency services work together – Police, nurses, Firies – everyone.”

While Brooke has enjoyed her time in Condobolin, she is now heading off to take up a position in Orange.

But their ability to make a difference in a short period of time outweighs any negatives related to the job.

“You can make a real difference in a short time,” Kim said.

“It’s a great asset for the public to have highly skilled paramedics who can have such an impact on their recovery.

“It’s about building  trust.  People  are  starting  to understand it’s  okay to call an ambulance and  not drive people who are hurt straight to Hospital. They will know the people coming to their door, so it is less intimidating and frightening for them. The community continue to update you on their loved one’s progress after you have helped them, which is really nice. “You don’t get follow up in metropolitan areas, so it’s great to have that connection with the community.”

All three said they enjoyed “thinking on their feet” and being “creative at times” in emergency situations.

To become paramedic, you have to undertake a Bachelor of Clinical Practice (Paramedics) Degree or similar. The nearest place where you can begin such a degree, is at Charles Sturt University, Bathurst. Visit the NSW Ambulance website www.ambulance.nsw.gov.au to find out more.

Kim, LJ and Brooke recommend talking to a paramedic before deciding to undertake such a degree.

“It is a very big decision. Sometimes people see the exciting part of the job, such as driving around with lights and sirens. But it can be a very fatiguing job, you can be a little bit unappreciated by some people, you can be abused, and then you have the confronting side such as road accidents. You really do see everything. Living in a small community, you need to realise you will see them all the time, when you go down the street to do your shopping, and then you may have to attend a scene which involves a person you know,” according to Kim.

Condobolin Ambulance Station is  fully  staffed at the moment, with a full complement of five paramedics.

“Please don’t be afraid to call an ambulance. Don’t ever think it is too much trouble for us to attend and find out what is ailing you. Always err  on the side of caution. Please don’t drive yourself  to Hospital. We have all the necessary equipment to assess the seriousness of the situation. We are here to help you. That’s our job,” Kim concluded.