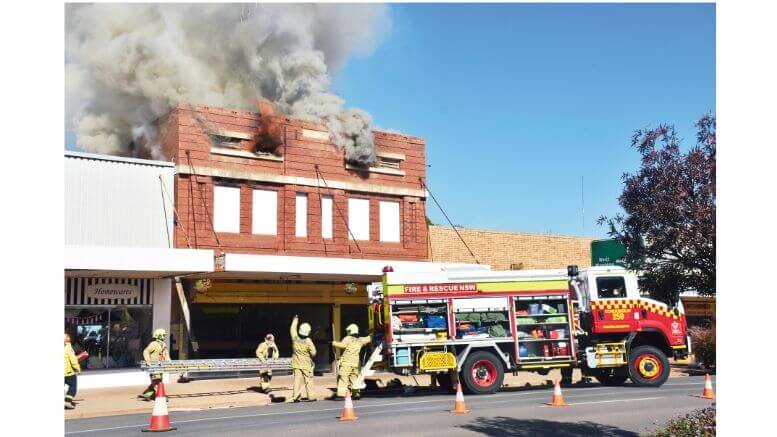 Condo Headquarters along with FRNSW 259, and other emergency services were called to attend a fire in Bathurst Street, Condobolin on Wednesday, 6 May. Image Credit: Melissa Blewitt.

A fire took hold in a building in Condobolin on Wednesday, 6 May completing destroying the premises.

Bathurst Street was closed off from around 10.30am, only re-opening at 4pm.

One side of the building was unoccupied, while Lachlan Insurance Agents worked from the other. The building was situated between Florist La Fleur and Condo Quality Meats. Surrounding businesses were evacuated.

Condo Headquarters along with FRNSW 259, and other emergency services were called to attend the fire.

Upon arrival they were confronted with a shop well alight on the second floor.

”FRNSW 259 took on attacking the fire while we supplied them with water with the Condo crew out the back and the Baratta crew in the main street,” a post on the Condo Rfs Facebook Page read.

“It took several hours to bring it under control.it was good to see a big turnout of firefighters. A Big thank you to everybody who attended.”

Police are investigating the cause of the fire.