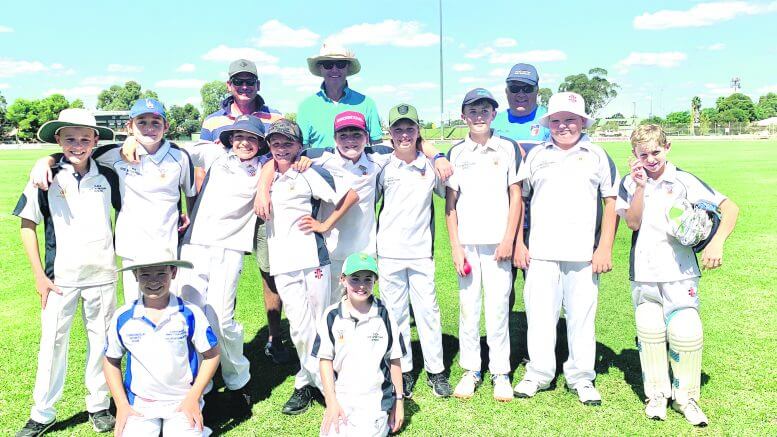 The Condobolin Under 12s Intertown Cricket Team headed to West Wyalong for the final round of the Lachlan Valley Under 12 Intertown Cricket Competition for the season. They came away with an wonderful win. Image Contributed.

Condobolin headed to West Wyalong on Sunday the 14th of February 2021 for the final round of the Lachlan Valley Under 12 Intertown Cricket Competition for 20/21. West Wyalong won the toss and sent Condobolin in to bat.

Callan Venables and Miller Taylor opened the batting for Condobolin against a much improved West Wyalong attack, who welcomed back four players who had not played in our last encounter.

Charlie Taunton then joined Nate Vincent at the crease with Condo in a world of pain. The pair would take us from 4/45 to 5/213 with an incredible 168 run partnership. Nate was the first to be dismissed but not until he had scored 113 runs. His first ever century. Nate scored his 113 runs off 66 balls for a strike rate of 171. Highlights of Nate’s century was the power in which he dispatched the bowlers and his running between the wickets which constantly put pressure on the West Wyalong fielders.

Charlie Taunton not to be outdone at the other end played a beautiful support role. Charlie was particularly punishing on any balls down leg side and his all round stroke play blossomed the longer he batted. His running between wickets with Nate was excellent also.

Charlie was dismissed with 2 balls of the last over remaining for 67 which brought Gus Laing to join Sam Kissane at the crease. Gus dismissed the first ball he faced for a glorious four to rub salt into West Wyalong’s wounds. A dot ball from the last ball of the innings would see Condobolin at 6/248 after 32 overs.

Miller Taylor and Charlie Girle opened the bowling for Condobolin and snuffed out any chance of a West Wyalong victory to have West Wyalong at 1/6 after six overs with a beautiful display of bowling. Miller getting the ball to swing late and Charlie bowling with genuine pace.

West Wyalong then proceeded to 85 runs when the dangerous Gus Laing struck in the eighteenth over removing the very good batsman Darcy Cattle who had made 28 runs with a clean bowl.

Youngsters Eli Heffernan and Sophia Stuckey then came into the attack and immediately put the pressure on. Sophia as per normal found the right line and length while at the other end Eli really troubled every batsman with his best ever spell of bowling. Eli bowled a maiden over, followed by a wicket maiden with an inspired spell of bowling to end up with the figures of 1/5 after 3 overs to mark himself as a bowler of the future.

Charlie Girle and Miller Taylor then came back into the attack to claim a wicket each followed by a run out to Ryley Smith who was having a great game in the field.

HIGHLIGHTS IN THE FIELD: The fielding of Ryley Smith in the outfield which was rewarded with a run out; The performance of the entire bowling group; The keeping of Callan Venables and Nate Vincent behind the stumps.

That’s it for another year of Intertown Cricket. Special mention to Warwick Laing and Tom Turner for umpiring and for all Tom Turner’s help with the team throughout the season.

Gilgais batted first opening with Ellijah Turner and Sophia Stuckey, after about seven weeks with Christmas and rain delays they batted beautifully with the new ball, with Elijah getting 22 runs.

Next saw the big hitters Charlie Girle and Jedd Turner both retiring on 50 not out, next in Jacob Doyle 4, Kye Kendall 3 no, Bede Leighton 7 & Baden Riley 1 no. Finishing with 173 runs after 30 overs. Wickets for Colts went to Ryley Smith 1/35 off 6 overs & Sam Kissane 1/17 off 6 overs.

In 35° heat in the shade Gilgais went out to bowl & they bowled as well as they batted. Chloe Stuckey opened with 1/12 off 2 overs, Charlie Girle 2/2 off 2 overs, Jedd Turner 1/3 off 2 overs & Ellijah Turner 1/1 off 1 over. Being short of players made it hard on the Colts to get the runs required to win. Runs went to Sam Kissane, Miller Taylor & Archie Ryan. Sam & Miller finished on 18 runs each. Colts were all out for 57 runs in 17 overs. 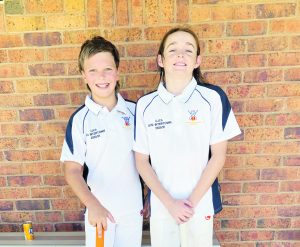 Charlie Taunton scored 67 runs and Nate Vincent made 113 runs in an incredible 168 run partnership during the match. Charlie also took a wicket. The batters were well supported by the bowlers. Image Contributed.