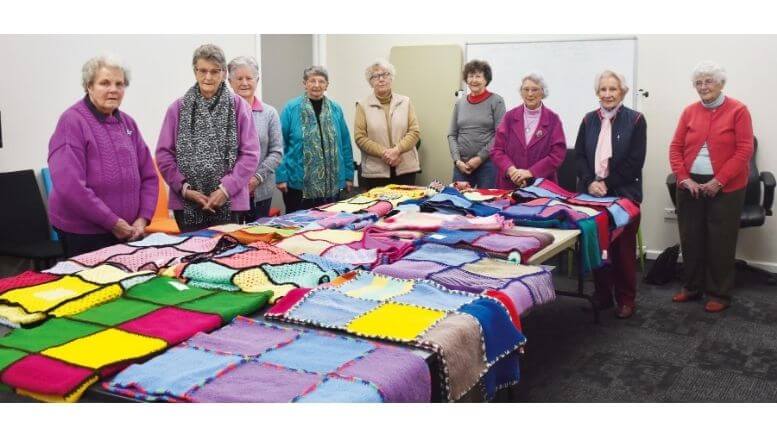 Condobolin Library Knitters Group are committed to helping those in need.

Fifteen dedicated ladies who make up the Condobolin Library Knitters Group have been knitting and crocheting colourful patchwork squares, which are then sewn together to make a rug.
Condobolin is among many towns and areas who contribute to this cause.

The rugs are then sent off to various charities to be given to those in need, both in Australia and overseas.

This project has been going for 28 years and has produced over 400,000 rugs and blankets. The Condobolin Library Knitters Group who usually meet at the library have made 26 rugs this year. COVID-19 has meant the Group cannot meet regularly but still continued to be part of the project by making square sin their own homes.

The completed Squares are sewn together in four rows by seven rows to size 100 centimetres x 175 centimetres (40 inches x 70 inches) to create a rug. It takes 28 squares (four squares wide by seven squares deep) to make a complete rug. All rugs have ‘Wrap With Love’ label sewn into them. All squares are made out of eight ply acrylic wool. A 25 centimetres (10 inch) square uses approximately 50 grams of eight ply wool.

Once the Condobolin rugs are completed they are sent to the Orange Library, which is a drop off point for Wrap With Love.

These rugs make their way to Sydney, where they can be distributed to those in need.

The ‘Wrap with love’ movement was started by Sonia Gidley-King OAM in 1992. After watching a news program about a civil war in Mozambique, she was moved to do something to help and got her friends together to knit rugs.

Ms Gidley-King passed away in 2010, but the movement continues with the support of many local groups and volunteers. In the past twenty years, Wrap with Love has sent more than 323,000 wraps to people in over 75 countries including Australia.

With the generous and enthusiastic support of many knitters including those in Condobolin, Area Contacts, administration staff, the media, transport companies and aid organisations, the organisation has wrapped more than 30,000 people with love and warmth each year, in Australia and around the World.

Wrap With Love works with national and international aid agencies of high repute, who make sure that our wraps are delivered directly to people in areas of trauma and need.

Since 1992, they have wrapped more than 414,000 people with love and warmth, in Australia and around the World. Wrap With Love delivers aid to needy countries, some experiencing extreme poverty or other natural disasters, some involved in war through our network of non-government aid organisations.