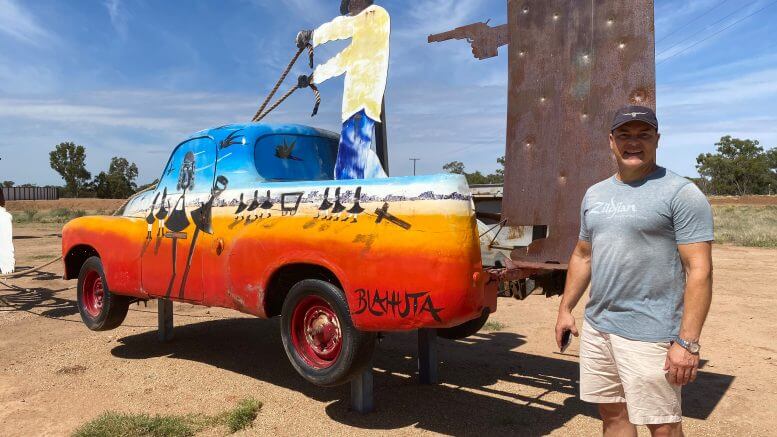 Artist Paul Blahuta was back in Condobolin to check out his work in the Utes in the Paddock installation. Image Contributed.

Artist Paul Blahuta visited Condobolin recently to take a look at his Ute in the Paddock artwork – “Clean Running Backed by Ned”.

The 1954 FJ Ute, donated by Burrawang West Station and Taylor’s Auto Centre, is proudly part of the Utes in the Paddock display near Condobolin.

It is a little known fact, that “Clean Running Backed by Ned” is a double-sided artwork.

The inscription on the plaque reads: “Famous outlaw Ned Kelly stays true to form as he pulls off another hold up. This time the victim is the artist, who felt compelled to use Ned’s form and story as an integral part of outback history. The horse’s transparency represents the fact that horses are not native to Australia, so not a solid part of its landscape. In this scene, they provide an alternate source of energy … true, clean horse power.”

Mr Blahuta may have been a little reluctant to get involved in the Utes in the Paddock at first, but now has nothing but admiration for the project in its entirety.

He said he was very impressed with the Utes in the Paddock installation in Condobolin, and wanted to say a big thank you to all those who made the project happen.

“This is an amazing initiative, and it would have taken much organisation and effort to bring this project from Ootha to Condobolin,” he said.

“It is truly a remarkable effort on everyone’s part.

“I want to offer my congratulations to all those who have been and continue to be involved in Utes in the Paddock. I can’t imagine the amount of effort it took to make this become a reality.

“It is such a unique and wonderful project to have in Condobolin. It generates interest from all over Australia. The installation is not just about the artwork but about the entire experience when visiting the site.”

“It has been such an incredible journey. Such passion and commitment from everyone who helped make it happen. Everyone should be so proud of this marvellous achievement.” 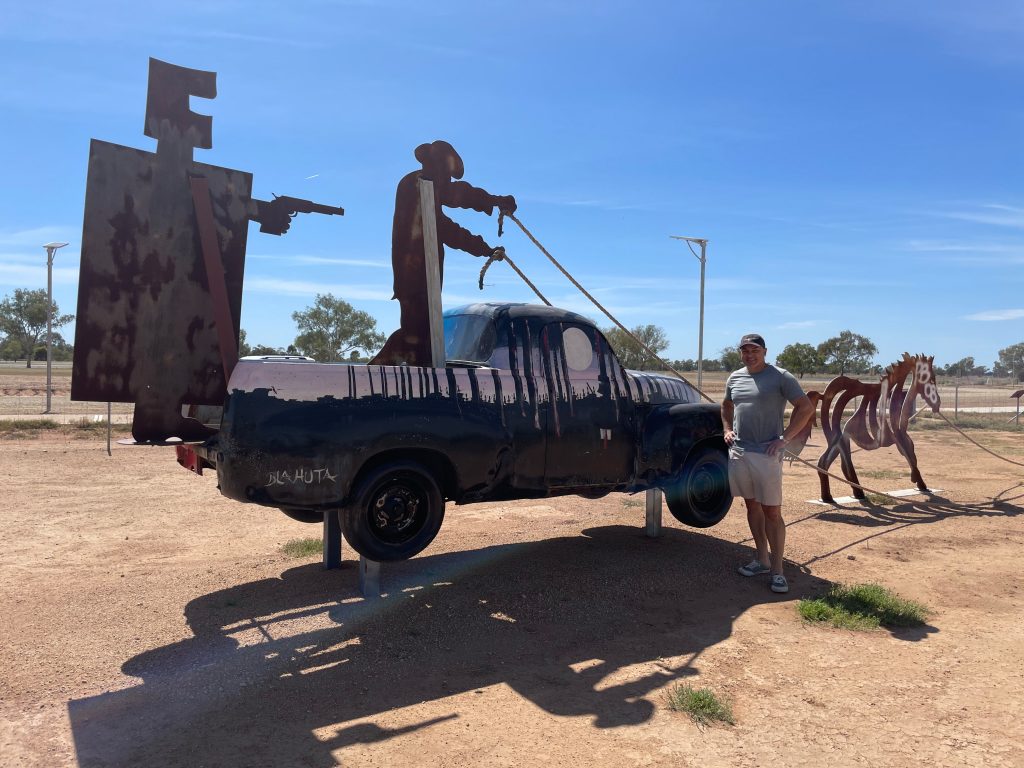 Artist Paul Blahuta showcases the reverse side of his Utes in the Paddock creation. He was impressed with all those involved from moving the project from Ootha to Condobolin. Image Contributed.