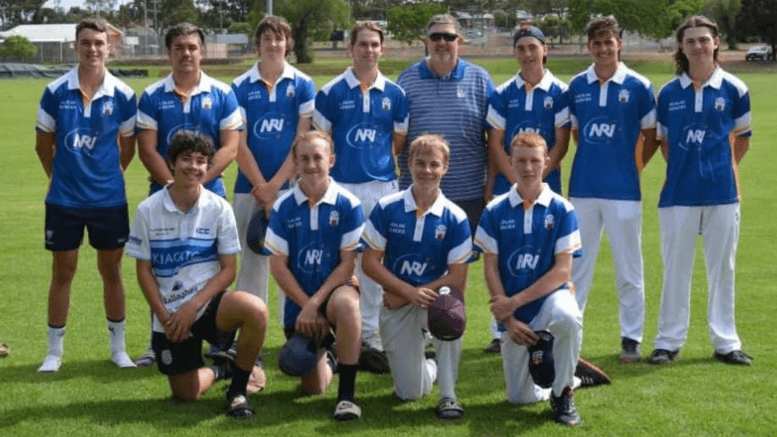 The Condobolin Under 17s side (with Coach Ian ‘Grimmy’ Grimshaw) who played in the Grand Final on Saturday, 26 March against Parkes. They may have been defeated, but the team is looking forward to next summer with great optimism. Image Credit: Condobolin Junior Cricket Association Facebook Page.

Junior Cricket
Under 17’s Grand Final 26-3-22
Condobolin travelled to play Parkes in the Grand Final at Woodward Oval.
Parkes won the toss and elected to bat first. The boys were off to a great start with Gregory Doyle opening the bowling and his second ball saw Triston Ross catch Liam Moody. The next two batsman weren’t so easy to get out, it wasn’t until the 9th over when Jack Jones was bowling, that Hunter Hawke was caught by Hudson Cartwright.
Ryan Goodsell took the next wicket when he bowled Jack Milne and Parkes were 3/67 off 10 overs.
The Condo side were much better in the field than in their previous game against Parkes and some great work in the outfield by the team including Blair McDonald, Connor Thompson and Ian Nash helped to stop Parkes’s tally from getting away on us.
Triston Ross claimed the next wicket with an LBW and Hudson Cartwright took the next wicket when Harry Kennedy was caught behind by Jedd Turner. Parkes had put on a few more runs and were now on 101.
Xavier Grimshaw’s bowling saw the next wicket fall with a catch to Ryan Goodsell. The following over saw Greg Doyle bowling his second over to one of Parkes best but a catch by Ryan Goodsell saw Ryan Dunford leave the field but not before top scoring on 30 runs.
Geordie Duncan & Jake Dunn were batting well until some great bowling by Triston Ross saw Jake caught out by Noah Nash. Parkes made 106 runs.
Wickets went to; Triston Ross 2/1 off 1.2 overs, Gregory Doyle 2/2 off 2, Ryan Goodsell 1/3 off 1, Hudson Cartwright 1/4 off 2, Jack Jones 1/11 off 2 and Xavier Grimshaw 1/13 off 2.
Triston Ross and Braith Sloane opened the batting for Condo but a bit of bad luck in the 3rd over, with a direct hit, saw Braith sent from the field.
Two overs later saw Condo lose another batsman, this was not the start we were after. Ryan Goodsell teamed up with Triston and then Gregory Doyle, the boy’s getting a few runs on the score, before Triston and Ryan retired. This was not turning out to be Condo’s best day with the bat when a short time later Gregory was caught behind. Wickets continued to fall and eventually our retirees were back in that is until Ryan was caught out and that was the end of our Grand Final dream. Condo finished 10/67 off 24 overs.
Triston Ross top scored on 25 runs n.o and Ryan Goodsell 16.
Contributed.