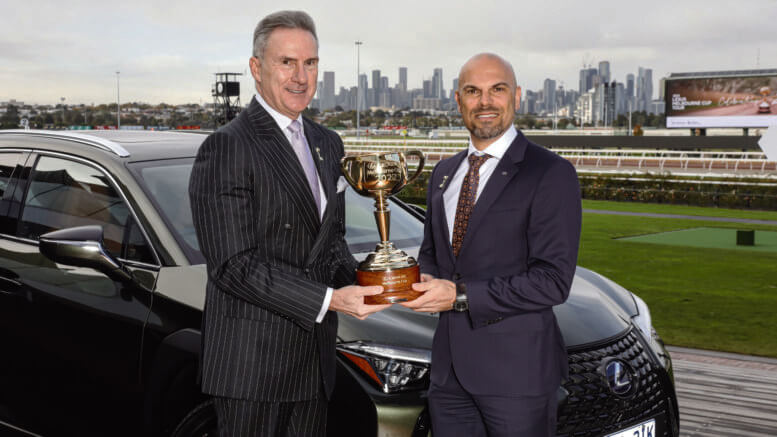 After receiving a record-breaking number of applications, the Victoria Racing Club (VRC) today announced Central Western Slopes, Tullibigeal, Dirnaseer, Junee and Coolamon in New South Wales will play host to the milestone 20th annual Lexus Melbourne Cup Tour.
Since the tour’s inception in 2003, the three-handled Cup has travelled far and wide across Australia and the world, travelling over 760,000 kilometres, visiting more than 560 destinations and engaging with tens of thousands of people.
This year’s milestone 20th edition will be unlike any other, visiting a total of 33 destinations across Australia, New Zealand and Singapore, with a number of Lexus Melbourne Cup heroes set to join the Cup on its journey.
The Cup Tour will begin its four-month journey visiting Tullibigeal on Tuesday 19th July before heading to Dirnaseer and Junee on Wednesday 20th July followed by Coolamon on Thursday 21st July.
Tullibigeal Picnic Race Club President Craig Tyack said “we look forward to welcoming the iconic trophy to Tullibigeal when it visits on tour. Lexus Melbourne Cup Day is always celebrated in Tulli due to our strong racing connection so we are very excited to come together as a community to celebrate the Cup’s arrival.”
Dirnaseer Hall Committee Member Darren Miller said “the past few years have been very difficult for the Dirnaseer community due to prolonged drought, floods and a mouse plague, so we are very much looking forward to coming together and welcoming the Cup when it visits in July.”
Coolamon Shire Council Mayor David McCann said “we are very excited to be part of this year’s Lexus Melbourne Cup Tour and look forward to welcoming the tour and sharing the magic of the People’s Cup with the Coolamon Shire community.”
The iconic trophy will then visit the Central Western Slopes from Monday 19th to Wednesday 21st September, visiting Forbes, Condobolin and West Wyalong.
General Manager Cowal, Evolution Mining Limited John Penhall said “we are very excited to welcome the Cup to West Wyalong, Forbes and Condobolin in September. It will be great to bring the cup to our communities, where the gold used in this year’s trophy was sourced.”
Central Western Slopes (encompassing Forbes, Condobolin and West Wyalong), Tullibigeal, Dirnaseer, Coolamon and Junee will also be part of the Lexus Melbourne Cup Tour National Sweep, which will see 24 rural and regional Cup Tour destinations across Australia be allocated a barrier for the 2022 Lexus Melbourne Cup.
The town which draws the barrier of the Lexus Melbourne Cup-winning horse will be presented with a cash prize of $50,000 to put towards a nominated charity for a local initiative.
VRC Chairman Neil Wilson said the club was looking forward to sharing the magic of the Cup with people across Australia.
“The Lexus Melbourne Cup Tour gives us an opportunity to share the magic of the Cup with people across the nation and the world,” Mr Wilson said.
“The Lexus Melbourne Cup Tour has only continued to grow in popularity, with a record-breaking number of applications from towns and communities for its milestone 20th edition.
“We are humbled by the excitement and joy the Cup brings to people of all ages and backgrounds and are pleased to be taking the iconic trophy back on the road and sharing it with the nation again after restricted travel over the past two years.”
Tour destinations will be supported by the VRC to plan and host a range of memorable community events during the Cup’s visit.
For further information about the 2022 Lexus Melbourne Cup Tour please visit MelbourneCupTour.com.au.
2022 Lexus Melbourne Cup Tour Destinations
Victoria – Melbourne, Portarlington, Yea, Echuca Moama, Stanhope, Maffra and Seaspray.
New South Wales – Sydney, Tullibigeal, Dirnaseer, Junee, Coolamon, Curban, Central Western Slopes, Wauchope and Howlong.
South Australia – Adelaide and Wallaroo.
Western Australia – Perth, Wagin and Newman (The Pilbara).
Tasmania – Hobart, and Devonport/Meander Valley.
Queensland – Brisbane, Charters Towers, Cloncurry, Warwick, Allora, Gold Coast and Kandanga.
International – Auckland (NZ), Cambridge (NZ), and Singapore.