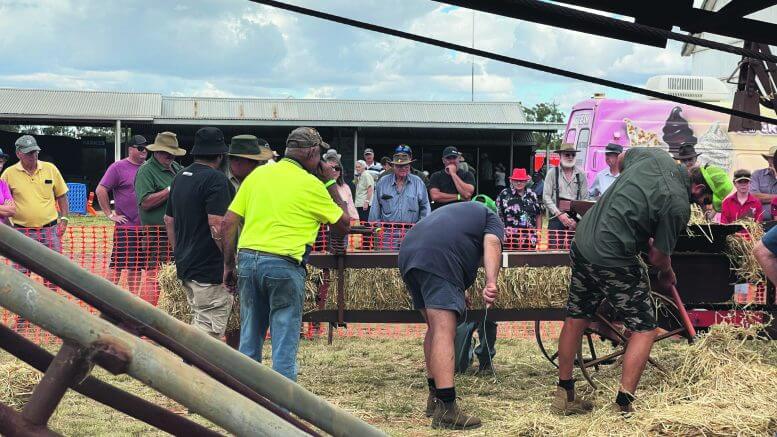 During the event, baling was one of the demonstrations on show. Images Contributed by Debbie Anderson.

On Saturday 26th March, Trundle’s P&A Society Inc held the Trundle Back in Time – Vintage Stationary Engine and Machinery Rally at the Trundle Showground.
The event showcased stationary engines, static displays of machinery, tractors and motor vehicles, Swap meet and market stalls, Yard Dog Trials, a Sheaf Tossing Competition and of course a Bar, BBQ, coffee van and Mr Whippy with camping facilities available.
The Sheep Dog Yard Trials began at 9am.
While the markets and swap stalls were running, parents could drop their kids off at the Kids Zone to play.
At 3pm the Sheaf Tossing Competition began. There was great prize money to be won. There were 3 classes available – under 15 years (first prize to boys and girls $20) 15-18 years (first prize male and female $50) and open adult section (first prize male and female $200).
Sheaf Tossing was a regular event at Agricultural Shows from 1914. A horizontal bar is used like a high jump, which is suspended between two posts and can be raised as the competition progresses.
A pitchfork is used to toss a sheaf of hay over the bar. The same pitchfork is used for all competitors so as not to give anybody an unfair advantage by allowing them to use their own customised pitchfork.
The sheaf is traditionally made with oaten hay tightly bound in a hessian wheat bag and weighing 3.6kgs and 56cm long. This being an acceptable standard for a sheaf of hay cut with a reaper and binder for chaff and used as fodder for livestock prior to the introduction of hay balers in the early 1950’s.
Three chances are given to each competitor to cleanly go over the bar. After all challengers have made their attempts, the bar is raised, and all successful competitors move on to the new height. This continues until all, but one athlete is eliminated.
The record for sheaf tossing is 18m 53cm!
Results for this years Sheaf Toss are:
• Under 15 Male
1st Charlie Taunton
Equal 2nd Seth Prebendarcik and Ned Jones
• Novice Female
1st Maggie Anderson
• Open Female
1st Alex Aveyard
• Open Male
Equal 1st Peter Thomas and Keith Jones
Results for the Yard Dog Trials are as follows:
1st – Russell Jones (Trundle)with Boss 94 points
Equal 2nd Boyd Aveyard (Trundle)with Patsy and Lindsey Kennard (Condobolin) with Dusty 84 points
3rd Boyd Aveyard (Trundle) with Jimmy 80 points
4th Lindsey Kennard (Condobolin)with Ringer 75 points
The judge for this years Yard Dog Trials was Olly Hanson (Forbes).
The Trundle Back in Time Vintage Stationary Engines & Machinery Rally was a huge success. The Trundle P&A Society committee thanks all who attended, sponsored and assisted on the day. It was a fabulous day well supported by the community and vintage enthusiasts.
Results contributed by Debbie Anderson. 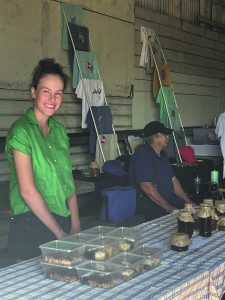 Maggie Anderson at her stall. Market and Swap meet stalls were available on the day selling all sorts of items. There was food, clothes, preservatives and more. 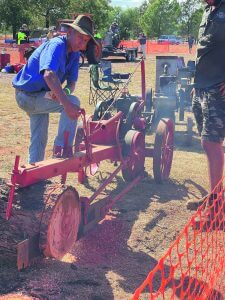 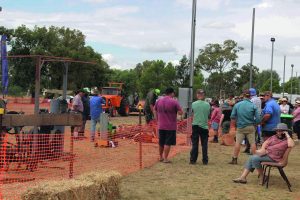