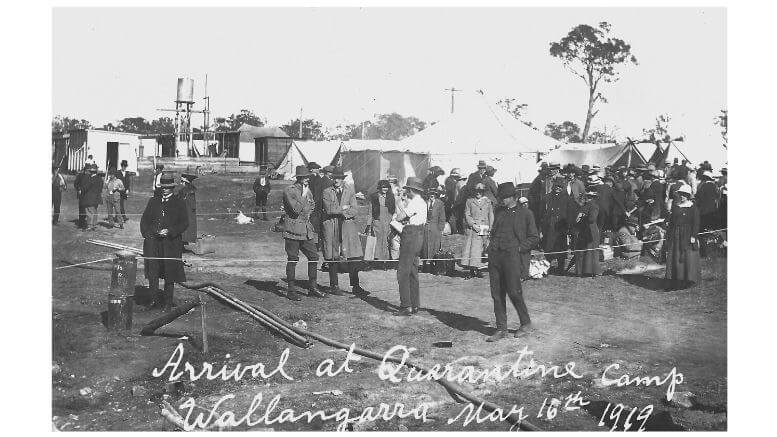 John and Margaret Coffey kept a phot of their time in Quarantine at Wallangarra on their way from Queensland to NSW. Contributed by Anne Coffey.

In 1918 the world was starting to recover from the effects of WWI when the Spanish Flu H1N1 broke out and killed an estimated 50 million people world wide before it receded at the end of 1919.

In those days there was not the record keeping, communication or medical facilities like we have now so the exact death toll will never be known. Populations were still suffering from the terrible losses and rationing of the war. There was an enormous dislocation of population as they dispersed through the world.

According to Curson and McCracken it was first seen in Europe in the final months of WWI. Within a year it had reached around the world, killing between 50 and 100 million people. It touched almost everyone and very few families or communities escaped its effects. They estimate that by 1918-1919 up to 30 per cent of people in the world were infected.

It seems no one is sure where the virus started. Some think China and it was spread by the Chinese as they spread throughout the world, some think it started in Kansas and was spread by US soldiers in their movements after the war.

Wherever it started it ended up infecting over 500 million people and took a terrible toll with an estimated 3% of the world’s population dying by the end of 1919. More than killed throughout the war.

It destroyed families, economies and societies just as the corona virus is now. It overwhelmed hospitals and mortuaries and funeral parlours. History is repeating itself. You just have to look at the scenes from Italy now to see the army trucks carrying away the bodies. In New York the news reports they have taken over an ice rink to store bodies.

Cities and countries that acted early and instigated social distancing, hand washing, wearing masks and staying at home controlled the rate of infection and had much better outcomes.
Advertising at the time was very similar to now with radio and newspapers urging people to wash their hands frequently, avoid crowds and wear masks.

It spared no one and when “the second wave hit in 1919 it was out of control and haemorrhages in the nose and lungs killed victims within three days.”

My Grandfathers brother Joe was a big strong man of 43. According to Grandad he came home feeling a bit sick and three days later he was dead. My Great Grandmother wrote to the War Office to ask them to let his younger brother Frank, who was still in France in the Army, know his brother had died.

Curson and McCraken note that In Australia in a period of six months in 1919 around 15,000 or more died and there were possibly up to two million people infected. Official figures of 12,000 deaths is possibly an underestimation. In the first wave men were harder hit than women but this changed in the second wave.

“More than 5000 marriages were affected by the loss of a partner and over 5000 children lost one or both parents. In 1919, almost 40 per cent of Sydney’s population had influenza” It was estimated by records of the time that 50% of all deaths in Sydney were because of the Spanish Flu. The Aboriginal population was hard hit with up to 50% dying in some communities.

Transport was restricted and Quarantine Camps were set up at the borders.

My Grandmother and Grandfather were in a Quarantine Camp at Wallangarra, just inside the Queensland Border in May 1919 and we have a postcard they had from that period. They showed rows of tents. None of the modern comforts of today, no electricity, no TV, Air Con, Internet or 5 star hotels to be quarantined in.

Reading the history of the time is very sobering. As then, right now our best defence is to stay at home, practice hand hygiene, eat and sleep well and look after each other. If we can keep it out of our community we will save many lives.

The more people do the right thing the quicker we will get back to normal, open our businesses and give time to develop a vaccine or treatment.

This information has been taken from Peter Curson and Kevin McCracken Department of Human Geography Macquarie University. An Australian perspective of the 1918–1919 influenza pandemic and 10 Facts About the Deadly 1918 Spanish Flu Epidemic by Léonie Chao-Fong

The links are below and I recommend people read it if they can. It will make you think carefully about your actions now.
https://www.phrp.com.au/wp-content/uploads/2014/10/NB06025.pdf
rhttps://www.historyhit.com/facts-about-the-deadly-1918-flu-epidemic/