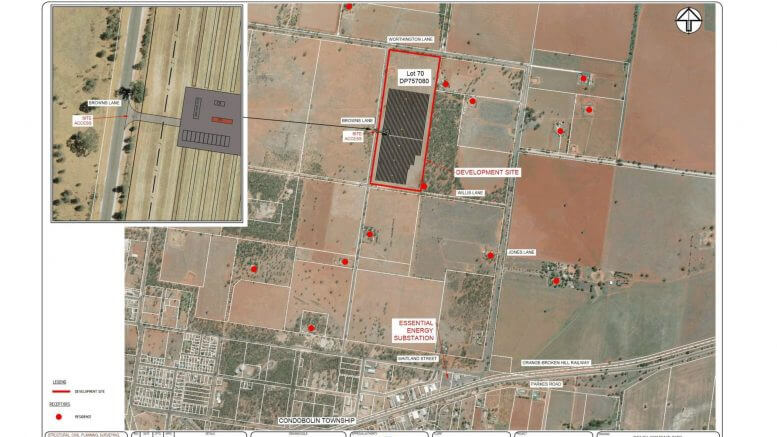 A $4 Million Solar Farm has been approved for Condobolin. Councillors voted seven to one to approve the Development Application from Enerparc Australia Pty Ltd. The proposal, is known as the ‘Condobolin Solar Farm’ or CSF, and will be located at 121 Willis Lane, Condobolin. Image Credits: Lachlan Shire Council.

Lachlan Shire Council has approved a Solar Farm, worth over $4 million, for Condobolin.

Councillors voted seven to one to approve the Development Application from Enerparc Australia Pty Ltd for the “Installation of a ground mounted photovoltaic solar farm facility (5 Mega-Watt) with battery storage and ancillary infrastructure” at an ordinary meeting held on Wednesday, 30 June.

The proposal, is known as the ‘Condobolin Solar Farm’ or CSF, and will be located at 121 Willis Lane, Condobolin.

The total Capital Investment Value is $4,776, 227 and the estimated lifespan of the facility is 25 years. The footprint of the project is approximately 16 hectares with a total of 14,896 panels to be installed.

It is expected the construction period will take four months with a maximum of 25 workers on-site.

In an Environment, Tourism and Economic Development report authored by the Manager of Town Planning, it asked Councillors to “approve DA2020/45 in accordance with the Recommended Conditions of Consent (subject to 42 conditions).”

Another part to the recommendation was also added: “Subject to a clause being included in Condition 33, that the applicant pay an agreed amount of funds to Council to ensure that there is adequate site remediation funds available and subject to such condition being legally enforceable,” after several Councillors raised concerns in regards to the decommissioning of the site.

“The site is located within a rural area with the predominant surrounding land uses being agricultural in nature,” the an Environment, Tourism and Economic Development report said.

“The built form of these properties are mixed with small clusters of established dwellings and farm buildings accessed by gravel and sealed roads. Views to and from the site are open and undulating.

“The development is set within the existing landscape which allows for views, above and beyond the development, to be maintained. The use of the site as a solar farm would likely not lead to any ongoing impacts that would detrimentally impact on the operations of nearby properties and does not prohibit or limit future redevelopment opportunities for surrounding sites to the south. The land to the south of Willis Lane has the potential to be developed further into smaller allotments with dwellings.

“Whilst the proposal is not consistent with the existing character of the area, given there are no existing solar farms in this location, it is not totally incompatible with adjacent land uses in the existing context and setting given it is confined to a single allotment of land,” the report said.

The report identified the development would mean some removal of trees, but the impact on flora and fauna would be “unlikely to be significant.”

“The development application proposes the removal of trees and ground vegetation from the site,” the report said.

“The principal impact on biodiversity is the permanent removal of four White Cypress Pine paddock trees and clearing of 60m2 of native groundcover in the roadside corridor to construct the new site access. An assessment of the impacts to the different flora and fauna types found that the impacts are unlikely to be significant given the heavily cleared nature of the site.”

Decommissioning, at the end of the life of the facility, will result in the land being returned to primary production purposes by the removal of all infrastructure associated with the development.

“To ensure that the land is left in a suitable state, for a return to primary production, a decommissioning plan is to be prepared and submitted to Council for approval,” the report stated.

“The plan will include, as a minimum, a timeline for the rehabilitation of the site, decommissioning of all solar panels, above and below the ground infrastructure, inverter stations, fencing and any other structures or infrastructure relating to the approved development and a programme of site restoration to return the land back into land that can be utilised for agricultural production.

“The objective of the decommissioning plan would be to restore the land capability to its pre-existing agricultural value and use. A recommended condition of consent requires that the plan be created prior to the facility commencing operation.”

The Development Application was notified to adjoining properties for a period of 21 days in accordance with the Environmental Planning Regulation 2000 and the Lachlan Shire Community Participation Plan. No submissions were received during this period.

The applicant advised that, prior to the lodgement of the development application, consultation was held with neighbours in the immediate area: “Enerparc initiated consultation with neighbours in May 2020 through sending a letter that outlined its intentions to seek approval for a 5MW solar farm, identified the proposed development site and included an offer to discuss the proposal if any neighbour so wished.”

Enerparc noted: “Neighbour engagement is important to us and we want to make sure we provide you with accurate and up to date information about the project and the approval processes involved. As a neighbour, we are also keen to hear your thoughts, draw on your local knowledge and answer any questions you may have about the solar farm.

“One neighbour responded, flagging concerns about visual impact, operational noise, property devaluation and the proximity to the airport.

“A second letter was sent in August 2020 providing an update on the project and advising that, prior to submission of the DA, Enerparc was eager to maximise opportunities for community feedback and invited neighbours to meet to discuss the project, answer any questions or share the results of the specialist studies undertaken. Enerparc noted that due to Covid it understood that meeting face to face may not be ideal for some residents at this time and as an alternative, offered to arrange online teleconferencing for interested residents. No responses were received by Enerparc.” 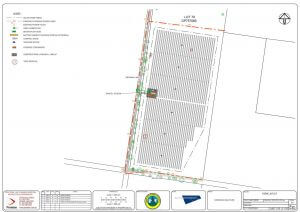 A $4 Million Solar Farm has been approved for Condobolin. Councillors voted seven to one to approve the Development Application from Enerparc Australia Pty Ltd. The proposal, is known as the ‘Condobolin Solar Farm’ or CSF, and will be located at 121 Willis Lane, Condobolin. Image Credits: Lachlan Shire Council.