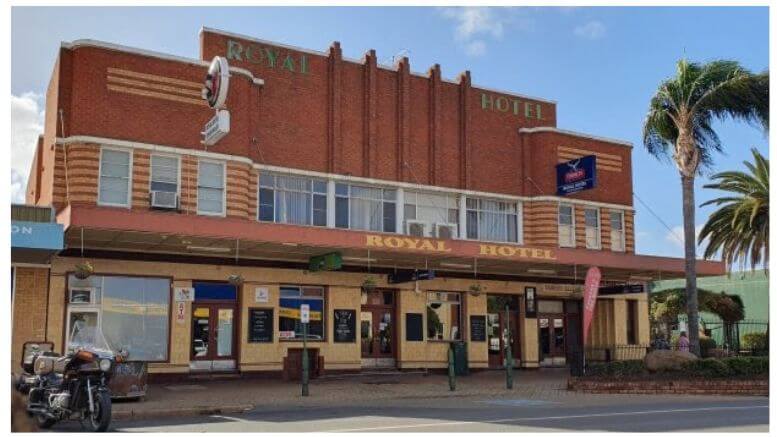 The Royal Hotel in Condobolin has been sold. It was sold by HTL Property’s Xavier Plunkett and allegedly went for more than $1.75 million, which was the price tag when it was last on the market in 2018. Image Contributed.

The Royal Hotel in Condobolin has been sold.

It last went under the hammer in 2018, where it brought $1.75 million. This time a figure has not been disclosed, however, regional pub sales across NSW exceeded $22 million this month.
“The pub has indeed been sold. It sold for more than it sold last time,” a post by David Price on the Royal Hotel Condobolin Public Group Facebook Page on Thursday, 28 May, said.

“It is the intention of the new owners (a massive hotel group based across NSW) to open it again with the idea of growing the business. Part of the strategy to re-open is to hold off until July.

“This will put us in a strong position to monitor the covid restraints and success based on the latest NSW Health advice available.

“It will allow us to minimise the health and safety risks to staff and patrons. It will also minimise any financial risk and allow us to plan for a better grand opening and launch the new Royal in what is a very different environment,” the post went on to say.

Other hotels to be sold include the Post Office Hotel in Moree, the Neath Hotel in the Hunter Valley, and the Yenda Hotel in Griffith.

They were all sold by HTL Property’s Xavier Plunkett, to an even mix of local regional and Sydney based buyers. With Moree’s stately Post Office Hotel selling to a well- known local Northern NSW hotel operator following a very active closed tender process.

“Agriculture, logistics, infrastructure and mining related industries have been particularly resolute in the face of the COVID-19 outbreak, and we feel that Regional markets that have an overweight exposure to these industries will likely respond very quickly post 1 June,” advised Mr Plunkett.

Whilst comparatively less affected Regional areas in NSW are likely to become popular domestic destinations following the relaxation of social distancing restrictions, savvy investors have commensurately identified strategic acquisition opportunities; and in doing so, are securing assets ahead of the well publicised and expected rebound.

“Lower population density and fewer virus transmissions generally in the Regional areas provides further optimism to the Regional pubs and accommodation sectors respectively; and suggests to us the potential for some well placed positivity to the shape of the ROE model our investors are typically attracted to.”

“From a whole of agency perspective, we’ve been buoyed by the willingness from both buy and sell-side parties to see this period as an outlier, or isolated juncture,” revealed HTL Property Managing Director, Andrew Jolliffe.

“Positive sentiment is being matched by positive action, and those willing to move rather than freeze in this marketplace can expect handsome financial and strategic reward over the short, medium and long term horizons,” he concluded.

The multiple regional hotel sales concluded in May closely follow the sale of the Australian Hotel in Cooma, which was also sold this year prior to Auction by HTL Property.