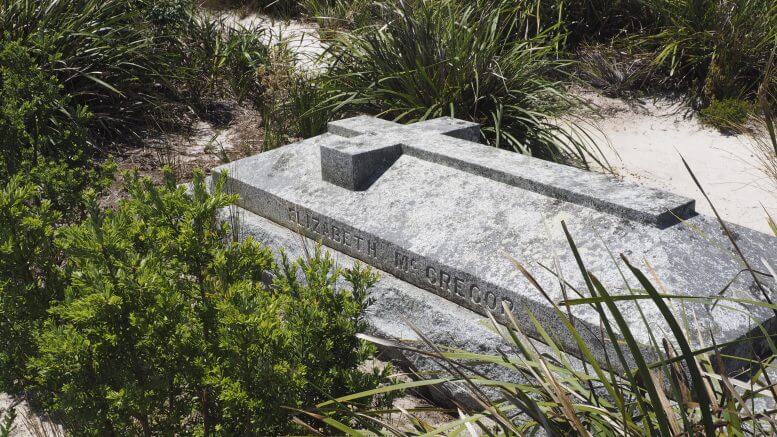 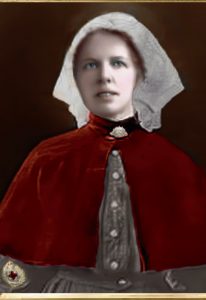 A created image (face inserted) of Elizabeth (Bess) McGregor, who was born in Condobolin on 26 May 1885 and died aged 33, caring for Soldiers during the Spanish Flu, at North Head Quarantine Station in Sydney on 5 December 1918. Image Credit: Allan Miles 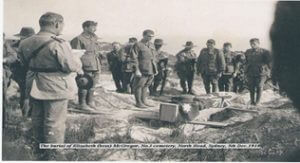 Australian Imperial Force Staff Nurse in the Australian Army Nursing Service, Elizabeth McGregor, who was born in Condobolin will be acknowledged for her inspiring career with an unveiling of a Memorial Plaque at Quarantine Station North Head Manly, Sydney on Sunday, 5 December.

An unveiling of a Memorial and a Dedication Ceremony will also take place in Condobolin at a date to be determined.

She may be known to some and be a mystery to others, and Operation Pilgrimage Group hopes to bring this World War One nurse to the attention of current generations, and pay tribute to her life, service and sacrifice.

Elizabeth McGregor was born on 26 May 1885 at Michabil Station, Condobolin. She died, aged 33, caring for Soldiers during the Spanish Flu, at North Head Quarantine Station in Sydney on 5 December 1918.

Operation Pilgrimage Group hope to form partnerships with Lachlan Shire Council and local businesses to recognise Elizabeth’s bravery and contribution for her country.

Elizabeth was one of the first nurses to serve on the Western Front on 28 August, 1914.

The heading is: Third Quarantine Cemetery Sister ELIZABETH McGREGOR, and was written By John Norton. Mr Norton was born and raised in Condobolin. He spent 28 plus years in the town, any may be known to some locals.

“Elizabeth (Bess) the fourth daughter and fourth child was born 26th May 1885. She did not marry. With the exception of one item, I have been unable to find anything about her growing up years- she taught Sunday school at the Condobolin Presbyterian Church (as mentioned in her Memorial service- see later). This activity would have been prior to her taking up a nursing career at the Royal Prince Alfred Hospital, Camperdown, Sydney. The Hospital Archives advised that “Elizabeth commenced her training on 6th December 1907 (she was aged 22) and completed the course on 5th June 1912, having had time off with Typhoid fever and Scarlet fever. Her work was very good; she passed her examinations with credit and was awarded her General Nursing Certificate and a Certificate in Dispensing. She left the hospital on receipt of her certificates and went to England to work.”

“At the outbreak of WW1 in 1914, Elizabeth was still in England. In August of that year, Lady Rachel, Countess of Dudley was instrumental in forming the Australian Voluntary Hospital (also known as The Lady Dudley Field Hospital) under the auspices of the British Red Cross.

“A publication, The Returned Soldier (dated 30th April 1931) and an article The History of the Australian Voluntary Hospital by Lt.Col.W.L.Eames, (both publications held by The Australian War Memorial in Canberra,) records many details of the activities of that hospital.

“The first contingent of medical doctors and nurses supplies etc. left England on 28th August 1914 to set up the hospital in France. Elizabeth was with the first contingent. Further to the comments expressed in the Memorial Service re Elizabeth’s service in WW1, information has now come to hand from the British Red Cross. Bearing in mind Lady Dudley’s Hospital went to France under the auspices of the British Red Cross and from their record it now transpires that Elizabeth joined the Red Cross in October 1914 and served in Serbia (possibly Servia, a town in Thessaloniki a Greek State in the north of the county whose capital is of the same name but was known as Salonica) until 3rd April 1916. She then served in Corfu (now known as Kerkira, a Greek island in the Ionian Sea) from 8th May 1916 until 19th June 1917.

“On this information it seems she spent very little time in France, about two months. The following are extracts from a book written by Lady Jean Foley titled “In Quarantine”, a history of the Quarantine station on North Head, Sydney:- “Throughout 1918 a pandemic of a particularly virulent strain of influenza spread through Europe, America, Africa and Asia reaching New Zealand in October 1918, when it was immediately declared a quarantinable disease in Australia”.

“The ’Medic’, which was carrying 833 troops and 156 crew members, was transporting members of the AIF and Italian Reservists to the battlefields of WW1, had been recalled when peace was declared. On 7th November 1918 the troopship docked in Wellington, New Zealand for refuelling before returning to Sydney and during this time the disease was carried onto the ship.

“On arrival in Port Jackson on 21st November 1918, there were 203 cases on board, quickly rising to 335 cases on landing. Twenty two of those infected were nurses who attended to the ‘Medic’s’ patients. The epidemic continued amongst the ‘Medic’s’ troops, crew and nurses for 40 days, killing 22 men and two nurses”.

“One of those nurses was Elizabeth McGregor.

“Elizabeth became infected on the 29th November 1918 and died 7.15am on the 5th December 1918. She was buried with full military honours on the same day in what was then known as the 3rd Burial Ground.

“Many of the Station staff and quarantined troops attended the burial some bringing wreaths made from wild flowers growing in the bush at North Head to place on the grave”.

“Photos of the actual burial and the grave covered with flowers, and the granite slab which was subsequently placed on the grave inscribed with her name, are held by me.

“On Sunday the 15th December 1918, a Memorial Service for Elizabeth was held in the Condobolin Presbyterian Church. The service was reported in full in the local paper The Lachlander dated 25th December, 1918 and the following extract gives an insight into Elizabeth’s life and times from 1914 to 1918:- “Born towards the close of the last century on Mickabil station, she grew into beautiful womanhood in this district.

“The time was when she taught the children in our Sunday school and there are those here tonight who can still turn the page of the prize which reveals her name as the teacher. At a later date she joined the nursing staff of R.P.A. Hospital, where she completed the training requisites for the practice of her profession.

“A couple of years afterwards she went to England where she was found at the outbreak of the war. On that same eventful day she enlisted for services abroad, and was one of the 15 chosen from 50 to 60 volunteers for service in France with Lady Dudley’s Hospital. On the completion of more than 18 months service there, she returned to England soon to go out to Servia to nurse the stricken amongst those gallant allies. For the 13 months yeoman service there she was awarded the Servian Cross for Mercy.

“It was disease alone which terminated her career in Salonika. After successfully undergoing an operation for a complaint quite new to her surgeon, she returned again to England. On desiring to join our own military nursing staff, the irony of officialism compelled her to return to Australia that she may do so. Moreover, in spite of her now fourth year of service, she was compelled to pay her passage back. For some months she rested. Then she volunteered for service again and was accepted, taking up duty at the Randwick Military Hospital. The call from the Quarantine Station for volunteers to nurse the stricken soldiers on the ‘Medic’ found a response from her” ( see paragraph 5) A photo of Elizabeth together with several articles about her work in Europe during World War One are included in a book written by Dr. Ruth Rae titled ‘Veiled Lives – Threading Australian Nursing History into the fabric of the First World War.’

“The following information was obtained from the archives of the University of Sydney:- In the early 1920s the University decided to erect a War Memorial to honour those who served in WW1.

“The Memorial was to be a Carillon, to be installed in the great tower and to honour not only the ex-students but to enable any person or group of persons to give a bell and suggest an inscription for it in memory of anyone who fell in the war, or in celebration of any event of the war.

“Someone obviously nominated Elizabeth and in due course bell No.23 was allocated. The bell cost 40 pounds ($80), her name followed by “may her contribution finally resonate throughout the pages of history” is inscribed thereon and funds for its purchase came from donations and a Mr.H.A.Russell (no relation that I am aware of) who was a member of the Executive Committee of the War Memorial Committee and who donated 50 pounds ($100) for a bell without apparently specifying which bell. Elizabeth’s name is also inscribed on a roll in the Great Tower.

“On Anzac day in 1928 the Carillon was officially opened and amongst the invited guests was a Miss. C. McGregor whom it would be reasonable to assume was Catherine (older sister) and who was probably the instigator to have a bell named in honour of Elizabeth.

“In November 2005 I wrote to the Roll of Honour Curator at the Australian War Memorial, Canberra to establish if Elizabeth qualified for inclusion on the Roll. From time to time the Research Centre at the War Memorial kept me informed of their progress.

“However, Elizabeth did not meet the criteria for inclusion and the following is an extract from the Research Centre letter of May, 2007.

“Eligibility criteria for Army Nurses for the First World War states that they must have been a Member of the Army Medical Corps Nursing Service who was accepted or appointed by the Director-General of Medical Services for service outside Australia.”

“The letter also stated they had searched all possible sources and I have no doubt they would have done this. However, I now hold a copy of a certificate showing Elizabeth was appointed a member of the Australian Army Nursing Service on the 23rd August 1918.

“The certificate was dated 30th December 1919??. Another little bit more information on the McGregor saga came to light from the photocopied material the Research Centre sent with their letter; this concerns the headstone on Elizabeth’s grave.

“Helen (Elizabeth’s younger sister) was responsible for having this done, for in November 1921 she wrote to the Chief Quarantine Office for permission to erect a memorial.

“The matter was taken up by James Cunningham and Son, monumental masons, in October 1922 (12 months after Helen wrote – from copies of other correspondence received from the Research Centre it looks like red tape caused the delay), approval was received on 6th October 1922 and the work carried out on Wednesday, 11th October, 1922.”
** North Head Sanctuary Foundation is a community based not-for-profit organisation dedicated to preserving North Head, Manly in Sydney, NSW as a protected environment for its natural attributes. A sanctuary that celebrates Australia’s indigenous, immigration and military heritage and that provides a place of learning, research and contemplation. North Head Sanctuary Foundation Nursery volunteers work in the Cemetery every month to remove weeds and keep the Cemetery tidy.