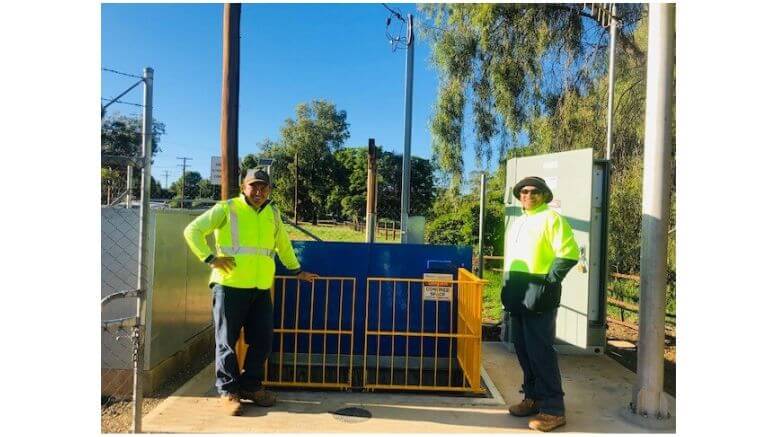 The Officers Parade Sewer Pump Station in Condobolin has been upgraded by Lachlan Shire Council.

During the work, further non-essential improvement opportunities were identified which will now also be undertaken.

These works are replacement of a gate valve that will allow the station to be isolated during maintenance; and installation of a concrete pit to house a flow meter to measure sewage volume.

In 2016, the station had modifications made to eliminate offensive odours. The latest upgrade raised and sealed the pump station to stop stormwater entering the pit during heavy rainfall events.

In the past this had triggered high-level alarms, risked sewage overflowing into the Lachlan River and overloaded the downstream sewerage treatment plant.
Replacing and raising the electrical switchboard also has made the site electrically safer during heavy rainfall.

Along with the electrical upgrade, Council upgraded the telemetry system. Telemetry enables facilities like the Officers Parade sewer pump station to be monitored and controlled from Council’s office. It also allows the gathering of data to measure the performance of the facilities over time and in a range of weather conditions.

Safety rails were added for improved safety for staff working around the pit when opened.

A Council operations staff member said he was pleased with the result of the upgrade.

“Now the station has been upgraded it means more efficient operation,” he said.

“Before, when it rained the storm water would cause a back-up and someone from Council would have to work for a couple of hours every night, manually pumping

“Also, the switch panel was an old system and took ages to dry out when it rained. Now we don’t have to worry about it. It’s a good result for the community members who rely on this pump station.”

In 2018, the pump station at the intersection of Moulder and Bathurst streets also underwent an upgrade. Council staff will now commence investigating potential upgrades of other sewer pump stations across the Shire.